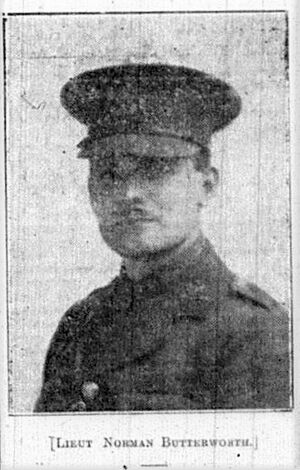 BUTTERWORTH, NORMAN. 2nd Lieutenant. 5th Battalion Manchester Regiment, attached 70th Squadron Royal Flying Corps. Born Holmfirth. Son of Alfred H and Alice A Butterworth, Park Ryding, Holmfirth. Educated at Holmfirth Wesleyan Day School, later became a boarder at Fulneck School, Pudsey, and finished his schooling in Switzerland. He became associated with the business of Messrs Armitage and Rhodes of Ravensthorpe and was one of the partners in the firm when war broke out. He enlisted in November, 1915, a few months after his brother Ernest was killed, and obtained a commission in the 5th Battalion Manchester Regiment. He embarked for France in October, 1916, attached to the 17th Battalion Manchester Regiment. Then he returned to England and went through training for the Royal Flying Corps, returning to France on 5.4.1917. On 9.5.1917, some British aircraft went over the German lines and they were attacked by a large number of German planes. There was a long and close fight in which two German machines were shot down and two others driven down. Norman was hit during the combat and killed instantaneously. The machine was very badly damaged and became almost uncontrollable and only by very fine piloting was it possible for the machine to return. Killed in action whilst flying, 9.5.1917, aged 24 years. Buried in BRAY MILITARY CEMETERY. Grave location:- Plot 2, Row G, Grave 16.

Norman Butterworth was born in 1892, the third son of Alfred Henry Butterworth and his wife Alice Annie. In the 1911 census, the family are living at Park Riding, Holmfirth, a large house at the top of Greenfield Road Holmfirth, an address befitting his father’s occupation of woollen manufacturer.

His life and military career were described in an article in the Holmfirth Express reporting his death as follows.

“Attached as he was to the Royal Flying Corps there can be little doubt now that Lieut. Norman Butterworth, the second son of Mr and Mrs A H Butterworth, Park Riding, Holmfirth, met with an instantaneous death whilst flying through the clouds. In the course of a sympathetic letter, an officer of the squadron of which Lieut. Butterworth was a member describes what took place. From this it would appear that on this occasion some British airships went over German lines and they were attacked by an overwhelming number of German scouts. There was a long and close fight in which two German machines were shot down and two others were driven down. Norman was hit about the middle of the combat and was killed instantaneously. The machine was very badly damaged and became almost uncontrollable and only by very fine piloting was it made possible for the machine to return. Thus ended a short – sadly too short – and eventful career in the British Army and thus has fallen in the service of his country a second member of the same family, for Norman’s elder brother Ernest was killed in action in July 1915. Of Norman Butterworth there is no need to say but little to describe the soldier and the man – he never cared for flattery. Those who knew him best know, however that whatever he undertook he was enthusiastic to the core and he did not make a lot of fuss about his enthusiasm. By nature indeed, he was of a retiring disposition. As a boy Norman first attended Holmfirth Wesleyan Day School and later became a boarder at Fulneck School, continuing his scholastic training in Switzerland. As a youth he became associated with the business of Messrs. Armitage and Rhodes, Ravensthorpe and was one of the partners in the firm when the war broke out. Joining His Majesty’s forces in November 1915 a few months after his brother Ernest had fallen, he straightaway took his commission becoming attached to the 5th Manchesters. The young officer went out to France in October 1916 attached to the 17th Manchesters. Then he returned to England and went through a training for the Flying Corps, returning to France on April 5th last, attached to the Royal Flying Corps. Lieut. Butterworth was particularly thoughtful with respect to the comfort of the lads with whom he was in company and was a great admirer of the work done by the Holmfirth Red Cross Society. In the course of a recent letter written to Mrs Mellor upon the receipt of a parcel for ‘the boys’ this is how Lieut. Butterworth in his usual breezy hearty way expressed his thanks on their behalf: ‘It bucks one up considerably out here to realise by the arrival of such useful things that the people at home knowing our discomforts are prepared to knit and supply in abundance the needful articles. The men were awfully glad of and badly in need of the socks and although they are not connected in civil life to woollen industries, they soon spotted the superior quality.’ Before becoming a soldier Norman was particularly interested in the training of homing pigeons and was the president of the Holmfirth Homing Society. In many spheres Norman Butterworth will be much missed and particularly at Park Riding. The members of the family we know have the deepest sympathy of our readers.”

Huddersfield and District Roll of Honour | Manchester Regiment | People
This page was last modified on 18 May 2020, at 10:29.