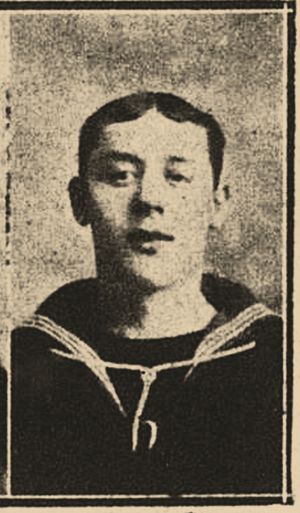 Norman — and his brother Wilfred — were sons of the late William and Mary Ellen Broadbent, of 22 Salford, Lockwood.

Wilfred and Norman Broadbent did not live in Lindley but are remembered on the family gravestone in St. Stephen's churchyard. In 1891 the family lived at 31 Clough Lane, Marsh and it was then that St Stephen’s may have become their parish church. It was in the graveyard in July 1889 that Whitely Broadbent who had died on the 18th aged only five years, was buried. Six years later, in October 1895 his father, William, who died on 23rd at the age of only 32, was also buried.

William had worked as a cotton warper. Wilfred, born in 1887, was working as a brass finisher by the time he was 14 in 1901. The family were by then were living in three rooms in Salford, Lockwood, which was presumably a smaller house than they had occupied in 1891. In addition to Wilfred there was Norman, born in the summer of 1890 and Ethel, born in 1893. Mary, a widow still under forty years old, must have found life very difficult with two children still at school. The children attended Lockwood Church Schools.

By 1911 they were still living at the Lockwood address. By this time, Norman who had enlisted in the Royal Naval Volunteer Reserve in February 1910, was serving as a stoker, at sea at the time of the census on HMS Cumberland, an armoured cruiser that was used as a training ship.

Wilfred, at this time, was working as an iron founder, still living at home. Four years later, in the spring of 1915, he married Elsie Winterbottom, and was by then a wood sawyers' assistant. By the time he joined the army, the couple were living at Swan Lane, Lockwood.

In August 1914 Norman was mobilised from the Fleet Reserve.

The Royal Naval Division was formed from the surplus recruits in the navy in August 1914. Norman was eventually transferred into the Howe Battalion and found himself at the siege of Antwerp in an infantry role having volunteered for the navy.

From Belgium the division was sent to the Middle East to take part in the Gallipoli landings that began in April 1915.

Norman died on 4 June 1915 when the Royal Naval Division took part in the Third Battle of Krithia, when a quarter of British troops were casualties. No grave is recorded so possibly Norman died on a hospital ship and was buried at sea. He is remembered on the Helles Memorial.

Norman was killed long before Wilfred enlisted on the 9 August 1917. Wilfred served eventually in the Machine Gun Corps and was killed during the German Spring Offensive in 1918 and has no known grave but is remembered on the Loos memorial.

As well as on the family grave in St Stephen's, Norman and Wilfred are both remembered at Emmanuel Church, Lockwood.

Their mother, Mary Ellen, died on 20 March 1941, and is buried in the family grave at St Stephen’s. There is no evidence that Elsie ever re-married.

BROADBENT, NORMAN. 1st Class Stoker. No SS/108049 (RFR/DEV/B/5636) Royal Naval Division (Howe Battalion). Born Paddock 25.5.1890. Son of the late William and Mary Ellen Broadbent, 22 Salford, Lockwood. Educated at Lockwood Church Schools. At the time of enlistment, was living at 22 Salford, Lockwood. Married. Enlisted in the Royal Naval Volunteer Reserve in February, 1910. In August, 1914, he was mobilised from the Royal Fleet Reserve and, in October 1914, he served at the siege of Antwerp. Killed in action at the Third Battle of Krithia, Gallipoli, on 4.6.1915, aged 25 years. Has no known grave. Commemorated on the HELLES MEMORIAL TO THE MISSING, GALLIPOLI.