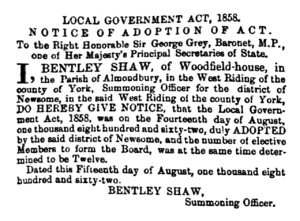 Newsome Local Board was the local authority body primarily responsible for issues relating to public health in the district of Newsome (in the township of Almondbury) and was formed on 14 August 1862 with an initial membership of 12.

The Newsome Local Board District was abolished on 7 September 1868 when the hamlet became part of the Almondbury & Newsome Ward within the new Municipal Borough of Huddersfield.

The extent of the local board district (taken from the early 1890s O.S. maps) is given below. The district is shaded in green and the township of Almondbury is shown in red.