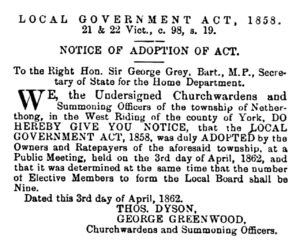 Netherthong Local Board was the local authority body primarily responsible for issues relating to public health in the township of Netherthong and was formed on 3 April 1862 with an initial membership of nine persons.

In 1879, the local board's clerk, Thomas Mellor, was replaced by Harry Lomax who remained the clerk to both the local board and its successor until 1912.[1]

Netherthong Local Board was abolished towards the end of 1894 and was superseded by Netherthong Urban District Council.