A small number of newspaper and journal articles suggest that James Bamforth's film The Kiss in the Tunnel (1898) was exhibited by Anglo-American Bio-Tableaux as early as late November 1898, alongside his short comic film The Honeymoon (1898). Research by Dr. Frank Gray indicates that G. A. Smith's version of The Kiss in the Tunnel was filmed in February 1899 and likely first exhibited on 20 March 1899 at the Canterbury Theatre, London. 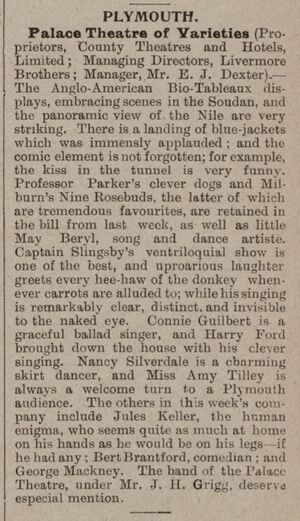 Palace Theatre of Varieties (Proprietors, County Theatres and Hotels, Limited; Managing Directors, Livermore Brothers; Manager, Mr. E. J. Dexter). — The Anglo-American Bio-Tableaux displays, embracing scenes in the Soudan, and the panoramic view of the Nile are very striking. There is a landing of blue-jackets which was immensly applauded; and the comic element is not forgotten; for example, the kiss in the tunnel is very funny. Professor Parker’s clever dogs and Milburn’s Nine Rosebuds, the latter of which are tremendous favourites, are retained in the bill from last week, as well as little May Beryl, song and dance artiste. Captain Slingsby’s ventriloquial show is one of the best, and uproarious laughter greets every hee-haw of the donkey whenever carrots are alluded to; while his singing is remarkably clear, distinct, and invisible to the naked eye. Connie Guilbert is a graceful ballad singer, and Harry Ford brought down the house with his clever singing. Nancy Silverdale is a charming skirt dancer, and Miss Amy Tilley is always a welcome turn to a Plymouth audience. The others in this week’s company include Jules Keller, the human enigma, who seems quite as much at home on his hands as he would be on his legs — if he had any; Bert Brantford, comedian; and George Mackney. The band of the Palace Theatre, under Mr. J. H. Grigg, deserve especial mention.