Moll Spring Mills and Dye Works[1] is situated on Old Moll Road, near Honley, in the Mag Brook valley.

The mills made use of Moll Spring, a natural spring which rises nearby, and are sometimes named "Old Moll Mills".

The dyeworks were operated by silk dyer George William Oldham from 1862, initially in partnership with his older brother, Henry.[2]

The following year, George W. Oldham was awarded a parent for "improvements in preparing and dyeing silk waste, flax, hemp, Indian or China grass or other fibrous substances."[3]

A fire broke out at the mill in January 1866 after a large amount of shoddy placed near a stove to dry caught fire. The damage was estimated at £250.[4] In September the following year, a fire caused around £70 of damage in a section of the mill occupied by Joseph Greenwood.[5]

The partnership between Henry and George William Oldham was dissolved in April 1871 and the latter carried on with the business.

In February 1882, the Honley Liberal Club held their annual ball in a room at Moll Spring Mills. It was reported that the room was brilliantly lit by both electric and gas light. Dancing began at 8pm and "was kept up very briskly until five o'clock on Saturday morning."[6]

On a dark winter evening in December 1884, a four-year-old boy was knocked down and killed near Lockwood. The inquest heard that it was likely he was killed by a cart "in the service of G.W. Oldham, silk dyer" but the driver claimed to have been travelling at an ordinary speed — "just trotting and nothing no more" — and "never saw the boy at all". In the absence of evidence to the contrary, the death was ruled accidental and it was recommended that better lighting should be installed at the location of the accident.[7]

The Buxton Road Mutual Improvement Society held a ramble from Berry Brow to Honley, via Armitage Bridge and Spring Wood, in May 1895. On the way, the visited the mill to admire Old Moll Spring and to taste its waters.[8]

Henry Bamford, who had been carrying on a silk-throwing business at the mills, was declared bankrupt in January 1898.

The body of the mill's foreman dyer Thomas Hargreaves (aged 45) was found drowned in the mill pond on Wednesday 15 June 1898. At the inquest into his death, his sister reported that he had gone to bed as normal, but had climbed out of his bedroom window in the middle of the night. He had apparently been feeling unwell for several days, but left behind no note as to why he decided to take his own life. Harry Oldham, representing his father, George W. Oldham, said that the deceased had been a "good, steady workman." A verdict of "suicide during temporary insanity" was returned.[9]

In April 1907, the mill's workforce presented George W. Oldham with a silver rosebowl to commemorate fifty years in business and also his 77th birthday. He died shortly after his 85th birthday, on 12 May 1914, by which time his son George Thompson Oldham was a junior partner in the company. 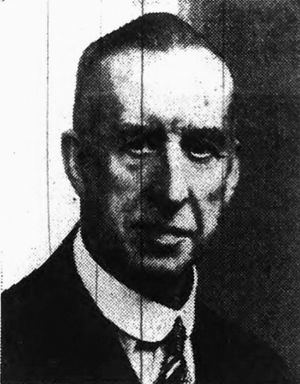 21-year-old Rifleman Archibald Gill, son of Fred Gill of Honley, was killed in action in late 1916. Prior to enlisting, he had worked at "Messrs. Oldham's dyeworks at Moll Spring."[10]

In February 1930, Mr. J.E. Turner completed 50 years of employment at G.W. Oldham's Dye Works, reportedly the third person to celebrate that milestone. He was presented with a gold watch and a cheque for £50.[11]

George Thompson Oldham, by then the senior partner in the company, died in February 1938, aged 69. He had been a Fellow of the Textile Institute, a vice-president of the Silk Association of Great Britain and Ireland, and a member of the Executive of the British Silk Research Association.[12]

George Thompson's son, George Hall Oldham, continued the family company until the outbreak of the Second World War. By then a Major, he left to command an anti-aircraft company and much of the business was sold off, bringing to an end 80 years of silk-dyeing. It was reported that some cloth dyeing would continue at Moll Spring Mills, but most of the equipment would be transferred to J.W. White and Sons of Macclesfield — ironically, George William Oldham had begun working in the silk-dyeing industry almost 100 years previously in Macclesfield.[13]

Further silk-dyeing hardware at the mill was auctioned in June 1940, including 25 copper dye cisterns and 4 warp dyeing machines.[14] Another auction of machinery took place on 20 July 1949.[15]

A fire broke out at the mill in October 1949, but speedy intervention by residents of nearby cottages helped to stop the fire spreading.[16]

George Hall Oldham finally sold Moll Spring Dye Works at an auction on 30 July 1952, together with "water rights, cottages, land and quarry." The buildings had a reported total floor area of over 4,000 square yards, including a four-storey mill, and the newspaper notice described it as "one of the best-known family businesses In the Huddersfield district."[17] He passed away a few months later, on 6 January 1953.