UNDER CONSTRUCTION!
This page is currently under construction and isn't complete yet!

The Huddersfield Improvement Commissioners held meetings during the summer of 1852 "for the purpose of considering the propriety of adopting the Labouring Classes' Lodging Houses Act, 1851" and to "take into consideration the propriety of purchasing or renting one or more buildings to be used as a common lodging house". Under the terms of the Act, it was neccessary to hold a public meeting of ratepayers and to abandon the scheme if more than ten percent of ratepayers objected.[1]

A town's meeting was held on the evening of Wednesday 18 August 1852 at the Guild Hall, with Thomas Mallinson in the chair. Chairman of the Commissioner, Joseph Brook, was called to describe the current situation regarding lodging houses for the poor in the town:[2]

It was necessary under the Improvement Act, and a recent act of the legislature, that all lodging-houses should be licensed, and there had just been made to the commissioners no less than 132 applications for lodging house licenses, but out of that number there were not twenty which were in accordance with the provisions of the act. Only three houses possessing the necessary qualifications to justify the commissioners in licensing them as common lodging houses, and yet the people seeking accommodation must be provided for in some way. The result was an overcrowding of improper places, giving rise to scenes of gross immorality, and engendering disease and death.

Brook estimated that a suitable building could be erected for £4,000 and accommodate 200 lodgers nightly at 3d. per person, giving a profit of 8% or 9%. The necessary funds could be borrowed from the government at 4% interest repayable over 30 years. As such, he felt that a model lodging house would not be a burden upon the ratepayers.

In response, James Brook felt that the costs associated with building and operating a large lodging house were unknown and that the scheme would be better run as a private concern:[3]

The class referred to were those who mingled 14 or 15 together in one room without any rule or decency. They presented themselves in their rags, filth, and lice, and were they (the ratepayers) to build a fine house at an expense of £4000 or £5000 to receive such creatures as these? Would they be received in their filth? [...] They would require an outhouse, a fresh suit of clothes, and a clean shirt for each, and the applicants would have to be well washed before they could be taken in.

From the state of the project, the two local newspapers took opposing stances — the Chronicle supported it whilst the Examiner "did not consider that it was a proper undertaking for a public corporate body like that of the Improvement Commissioners".[4]

By January 1853, "some freehold land and buildings, occupied as warehouses, at Chapel Hill" had been offered for the purposes of a lodging house. The buildings had previously been used by the firm W.W. & H. Stables. The Improvement Commissioners resolved that architect William Cocking "be employed to report as to their structure, and to prepare plans to make them fit for the reception of beds, and other requisites for a model lodging house".[5] At the February meeting, it was reported that adding on a further storey to the warehouse would provide space for 176 beds and that the total cost was estimated at £3,592 10s.[6]

By May 1853, the Commissioners had written to the General Board of Health with their proposals. In return, the Board responded with their support and "complimented Huddersfield on being the first town to avail themselves of the provisions of the model lodging house act". A loan of £3,600 was authorised.[7]

In August 1853, the following contractors were appointed to carry out the work:[8]

By October 1853, the Commissioners had "accepted the offer of the Atlas Assurance Company to advance the loan of £3,600 required for the New Model Lodging House, to be repayed in thirty annual instalments, at the rate of four and half per cent interest per annum".[9]

During April, May and June 1854, tenders were accepted for painting and decoration, and for internal fixtures such as beds (50 were supplied by John Sunderland of Manchester at 4s. 2d. each) and iron porcelain-enamelled wash basins (3s. 9d. each from a firm in West Bromwich).[10]

In August 1854, a tender from Messrs. Hammond and Tetlow to paint the outside of the building for £39 19s. 6d. was accepted. It was also announced that Abraham Milnes and his wife had been appointed to live in the building as the caretakers, replacing Jonathan Frost — who was named as the "vagrant master and overseer" in the 1851 Census — and his wife Mary.[11] However, The Milnes' were given notice to leave on 3 November 1854.[12]

In September 1854, the Commissioners agreed to borrow a further £1,400 "for the purpose of finishing and furnishing" the model lodging house, bringing the total borrowed to date to £5,000.[13]

At the November meeting of the Commissioners, it was reported that the total cost of the model lodging house £5,146 0s. 3d.[14] 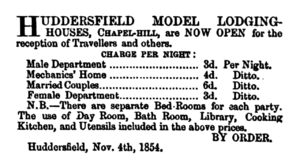 More than two years after first being proposed, the Huddersfield Model Lodging House was opened on Saturday 4 November 1854.

In their lengthy description of the building the Huddersfield Chronicle regarded it "palace" when "compared with the vile, filthy, over-crowded, stifling, and disease-engendering hovels which poor humanity is compelled to resort to in innumerable instances in many parts of the town".[15]

Two much praise cannot be lavished upon this noble institution; and countless are the thanks due to the late venerable Chairman of the Commissioners' Board, who originated it. The efforts of the late Clerk to the Board of Works, and of the Architect, thus happily crowned with success, have been unremitting.

The rates were 3d. per person and 6d. for a married couple. Accommodation on the upper floor was 4d. The weekly charges were 1s. 6d., 3s. and 2s. respectively. Anyone staying seven consecutive days did not have to pay for the seventh night.

In total, the building could accommodate 196 people — 12 married couples, 40 single females, 60 single men, and 70 in the "mechanics' home" (situated on the upper floor).

According to the local newspapers, the number of inmates during the first week was 49 males, 5 females, and 10 married couples. The number rose sharply the following week when local authorities closed a number of the unlicensed lodging houses in the town. By the end of the second week, a total of 263 people (52 females and 211 men) had been admitted.[16]

By January 1855, the rules and regulations had been decided upon and these bye-laws were printed and posted in each room. These included:[17]

In mid-May 1855, the annual fair in Huddersfield brought a large number of travellers into the town and the lodging house saw its highest number of inmates to date, with 75 women and 330 men during the week.[18]

In January 1856, the Huddersfield Fire Brigade "practised upon the Model Lodging House, testing their power of throwing the water over any part of the building".[19]

At the end of 1856, the superintendent of the lodging house reported that during the previous 12 months the number of lodgers had been 22,302, an increase of 6,357 on the previous year.[20]

Soon after the traffic lights at the top of Chapel Hill notice Chapel Street on the left. The names of both hill and street mark the one time presence of the Buxton Road Chapel, a so-called 'Dissenter's Chapel' built in 1775, which stood on the lower corner of Chapel Street. Originally called Old Bank Chapel it was the first Wesleyan Methodist church to be built in the town. It was rebuilt and renamed in 1837, closed in 1950 and subsequently demolished to make way for road improvements in the area.

Demolished at the same time was the Model Lodging House which stood next to the chapel. This was an old warehouse, converted in 1854 by the Improvement Commissioners, at a cost of nearly £6,000, to provide nightly accommodation for some two hundred of the poorest members of the community. The instigator of the scheme was a local Radical, Joshua Hobson, who was proud to state that the lodging house was the only one in England to be constructed and supported out of the public rates. The building was enlarged in 1879 to contain one hundred and eighty six beds. That there was a long-time need for cheap lodgings is revealed by the dealings for the year 1918, which show a 96% take up of beds:

The Model Lodging House continued to provide accommodation until it was demolished in 1957.

Buildings | Demolished buildings | Pages under construction
This page was last modified on 12 November 2018, at 08:32.