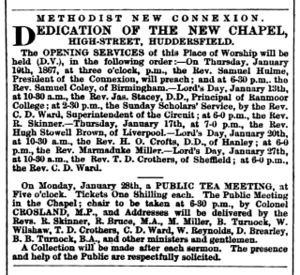 By the early 1860s, the increasing size of the congregation necessitated the building of a replacement chapel. The foundation stone of the new chapel, which was designed by Leeds architect William Hill and built by Abraham Graham & Sons using stone from Crosland Hill[1], was laid on Wednesday 27 July 1864 by Joseph Crosland.[2] Although not quite completed at the time, the new chapel — which was dubbed "the Cathedral of the New Connexion" due to its size — was opened in a ceremony held on Thursday 10 January 1867.[3]

The chapel closed in 1944, with the congregation joining Brunswick Street Methodist Chapel. The building was sold at auction for £12,000 in March 1945, although the "communion rail, dais, and three stained glass windows were not included in the sale".[4]

The former chapel was eventually demolished circa 1956.[5]

Buildings | Churches and places of worship | Demolished buildings | Methodist chapels and churches | Stub entry
This page was last modified on 1 December 2020, at 20:08.