The Meltham Mills Convalescent Home in Meltham was built by Charles Brook (1814-1872), who provided an initial fund of £30,000 for the construction and ongoing maintenance of the building.[1]

The site chosen comprised over 10 acres of land at Meal Hill[2], south-east of Meltham and near to Thick Hollins, and was described as being "encompassed by most beautiful landscape scenery"[3] and patients had access to the nearby Meltham Pleasure Grounds, where they "may at pleasure prolong their perambulations."[4]

Knowing the very kind interest you take in the Huddersfield Infirmary, I beg to make you the medium of informing my Huddersfield friends of my intention to carry out some public work for the benefit of the poor of my native town and district. Ever since I came to reside here, I have had such a desire, and I have only been waiting till I got my affairs settled as regards my business at Meltham Mills, and the rather heavy work now completed at this place. After much thought I have fixed upon building a Convalescent Home in connection with the infirmary. For this purpose I propose to give £30,000, part of which sum is to be applied to the erection, and the interest of the remainder towards its support. As to any future arrangements, I am anxious to have the advice of your Board and medical men in carrying out my object. I may add it is my intention to erect the building near Meltham Mills.

The Convalescent Home was designed by Edward Birchall of Leeds and the construction was supervised by J. Kirk & Sons of Huddersfield using local stone and blue slate. Advertisements were placed by Birchall in the press inviting tenders in early March 1869.[5]

The foundation stone was laid on 28 October 1868 by the Earl de Grey and Ripon of Wrest Park, Bedfordshire. In their lengthy coverage of the ceremony, the Chronicle gave a detailed description of the plans:[3]

The style of architecture adopted for this hospital is of the domestic Gothic character, with a few modern developments. The main front will face north east, and be about 190 feet long. The centre part of this will project a little, and be devoted to the administrative department, and will contain, on the ground floor, a central entrance, with matron's parlour, surgeons' consulting room, and patients' waiting room. The wards branch out right and left, for each sex, and consist, on the ground floor, of capacious staircases and corridors, which, being on the south side of the building, will be agreeable for the invalids in bad weather, leading to the convalescent day rooms and night wards for the infirm. The patients entrances, from the recreation grounds, will be to the main staircases, under covered glass porticoes; extending further south west is a dining hall, with the kitchens, pantries, and storerooms beyond. On the first floor, the central part contains the matron's and nurses' bedrooms, and storerooms for bedding and linen. There are two night wards for each sex, which are divided by low partitions, eight feet high, for privacy, each apartment accommodating two beds. There are lavatories and bathrooms, furnished with hot and cold water. There will be accommodation for 30 males and 30 females, and the hospital will be so arranged as to be capable of enlargement. The apartments for the domestics will be over the kitchens.

The Chronicle reported in September 1870 that the construction was "now rapidly drawing to a completion externally".[6]

Further coverage appeared in February 1871 in The Architect, which included a plan of the first floor and details of those involved with the construction:[7]

The building was formally opened by Charles Brook on 3 August 1871.

Following the ceremony, the Huddersfield Chronicle published the following ode to Brook:[12]

Yon noble pile that proudly lifts its head.
Where at its foot a happy valley's spread ;
What wills it there ? Approach and round it look.
The generous founder is the good Charles Brook.
Large is his wealth, but, larger still his heart.
In every weal he takes a foremost part.
His heart suggested this in mercy's name,
And, when accomplished, "blushed to find it fame."
Here kindness will with ready hand bestow
The necessary care — the genial glow
That nerves the weak, and soothes the oft worn mind
Of suffering sons and daughters of mankind.
Amidst these hills the good man passed his days,
Industry and quiet zeal mark'd his ways.
His workmen found in him a master rare,
He took their labour, but made them his care.
The valley smiles, while prospers all around,
Churches, schools, and Flora's bowers adorn the ground.
He in his present chosen sylvan spot,
Where in repose he dwells, all cares forgot.
We see him still, showering blessings down,
And giving freely to each want around.
Let voices then utter his praises there,
While his own valley echoes back its share,
Until his work all done, the "good fight fought,"
His soul shall wing to Him, whose will he sought.

By mid-September 1871, the Huddersfield Infirmary was sending patients to the Convalescent Home[13] and, in the first few months, an average of 7 patients per week were sent to the home from the Infirmary.

Along with the Lawtons, the 1881 Census listed 34 patients (8 female and 26 male). Also resident at the Home were Anne Walker (cook), Mary Ann Taylor (housemaid) and Mary Stevenson (kitchen maid). Robert Parkin was the gardener for the Home and resided with his family in the Lodge House.

From around 1882, the matron was Hannah Smith (c.1845-1895), wife of John Rushworth Smith, who served in that role until her death in November 1895.[16] During her years in post, the Chronicle reported on a number of entertainment evenings in which guests would sing, recite poetry and read humorous stories to the patents.

Evelyn Esther Calvert (c.1858-1928), daughter-in-law of Rev. William Bainbridge Calvert (1820-1892), the former Vicar of Huddersfield, served as the matron for over 30 years from 1896 onwards.[17] In January 1898, the Chronicle reported that her son had lost four all of the fingers on his left hand in an accident "whilst working at a plaining machine at the works of Messrs. Calvert, engineers, Chapel Hill."[18] The Yorkshire Post (23/Oct/1928) reported her death in 1928 in London and noted that "her husband was drowned in an accident in Germany many years ago". 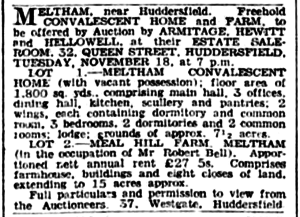 Plans to turn the building into a residential special school were delayed when extensive dry rot was found, pushing the cost of the refurbishment and alterations to around £20,000.[22]

By 1953, the building had opened as the "Royd Edge Boarding School for Educationally Subnormal Girls", with facilities for 50 pupils. It remained a residential school until the early 1990s, after which it became a day school.[23]

The school eventually closed in 1997 and was converted into a residential property named "The Woodlands".

Buildings | Hospitals, infirmaries and convalescent homes
This page was last modified on 31 December 2020, at 10:22.