Meltham Local Board was the local authority body primarily responsible for issues relating to public health in the Township of Meltham and was formed in 1860. 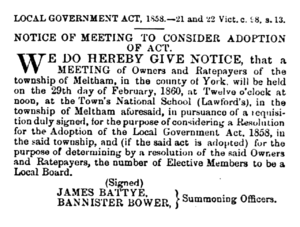 A total of 22 nominations were put forward for the 12 places on the local board, with voting taking place during the week commencing 21 May 1860.[2]

The first meeting took place on 30 May 1860 at the Rose and Crown Inn where Charles Brook of Healey House was unanimously elected the chairman.[3] At their third meeting in July, George Taylor was appointed to the combined role of clerk, assistant surveyor, inspector of nuisances and rate collector on a salary of £50 per year.[4]

Meltham Local Board was superseded by Meltham Urban District Council in 1895.