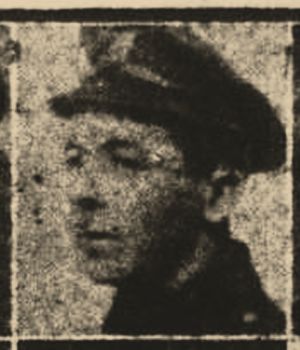 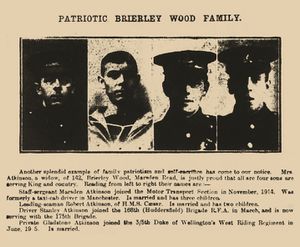 Another splendid example of family patriotism and self-sacrifice has come to our notice. Mrs Atkinson, a widow, of 142, Brierley Wood, Marsden Road, is justly proud that all her four sons are serving King and country. Reading from left to right their names are:-

Staff-sergeant Marsden Atkinson joined the Motor Transport Section in November, 1914. Was formerly a taxi-cab driver in Manchester. Is married and has three children.

Leading-seaman Robert Atkinson, of H.M.S. Caesar. Is married and has to children.

Driver Stanley Atkinson joined the 168th (Huddersfield) Brigade R.F.A. in March, and is now serving with the 17th Brigade.

Army Service Corps | Huddersfield and District Roll of Honour | People | Recipients of the Meritorious Service Medal
This page was last modified on 18 November 2020, at 22:06.