Lower Hall Mill was a small mill near Netherton Bank Bottom, situated on the South Crosland side of Mag Brook, and was linked to Lower Hall Farm.

What little remains of the building now lays in ruins.

The mill was owned by John Beaumont in the 1790s and he sought a court order to force the owner of Cocking Steps Mill to lower a weir that was detrimentally affecting the flow of water at Lower Hall Mill.

By the 1860s, John Brooke was resident at the mill. 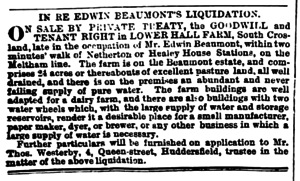 In January 1873, Lower Hall Farm was sold as part of the liquidation of Edwin Beaumont's assets. Described as comprising 24 acres, the auction notice also mentioned "buildings with two water-wheels, which, with the large supply of water and storage reservoirs, render it a desirable place for a small manufacturer, paper-maker, dyer, or brewer, or any other business in which a large supply of water is necessary."[1]

It seems likely the mill had been abandoned by the late 1800s and presumably was left to fall into disrepair.[2]