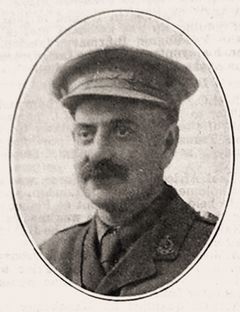 He married Alice Parke on 23 October 1889 at Tideswell, Derbyshire.

Prior to October 1893, he was in partnership with Dr. J. Unsworth Green at 1 York Place, Huddersfield.[1]

At the time of the 1911 Census, he was a physician residing at 144 New Hey Road, Huddersfield.

Oct 26 [1918]. — Lieut. Col. Louis P. Demetriadi, RAMC, TD, MD, FRCS (E), late in command of West Riding Casualty Clearing Station, Queen's Road, Huddersfield, died at Southport in his 56th year. In January he relinquished his command, after 20 years' service in the Territorial Force (1/5 Dukes), with whom he mobilised in 1914, and later went to France.

DEMETRIADI, LOUIS P. Lieutenant Colonel. Royal Army Medical Corps. Born Manchester 1862. Educated at Manchester Grammar School and at Kings College, London. Attended Leeds University, taking the degrees of M.D. (Durham), F.R.C.S. (Edinburgh) and a Diploma in Public Health. He commenced medical work in Huddersfield as an assistant to the late Doctor Macaskie. In 1886 to 1887 he was one of the house surgeons at the Huddersfield Royal Infirmary. He commenced in practice on his own account at 30 New North Road, Huddersfield and removed to Lindley in 1891. He continued in General Practice until 1912. In 1897, Doctor Demetriadi joined the 2nd Volunteer Battalion Duke of Wellington's Regiment with the rank of Lieutenant and served as Medical Officer for 18 years. He took a keen interest in training and organising the stretcher-bearers in ambulance work. When war was declared he went out with the local battalion to their training ground and, in April 1915, he was given command of the West Riding (49th) Casualty Clearing Station and took that unit to the front. He remained with this unit for nearly two years until his health gave way and, in November 1917, he was compelled to relinquish his commission. He was a church warden at Lindley Church for 4 years. He was founder-president and the first Captain of the Outlane Golf Club. He died at Southport on 26.10.1918, aged 56 years. Buried with full military honours in St. STEPHEN'S CHURCHYARD, LINDLEY. Grave location:- 5, J.

A chair is dedicated to his memory in St. Stephen's Church.