Lord's Mill is a former woollen mill situated on the Honley side of Mag Brook in the Mag Valley, below Old Moll Road.

The mill was built in the early 1790s and was apparently named in reference to the Earl of Dartmouth, the Lord of the Manor.

In January 1839, it was reported that the partnership of George Beaumont and Matthew Beaumont, "fulling millers" of Lord's Mill, Honley, had been dissolved.[1]

On 10 March 1849, a fire broke out at the mill. A fire engine from Crosland Mill quickly arrived and was able to stop the fire spreading. 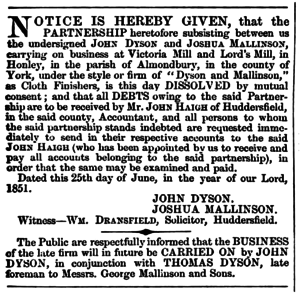 In July 1851, notices were posted that the partnership of cloth finishers John Dyson and Joshua Mallinson, "carrying on business at Victoria Mill and Lord's Mill, in Honley", had been dissolved.[2] In September 1851, much of the mill's machinery was placed up for auction.[3]

In May 1853, Andrew Cartwright was charged with trespassing on land belonging to Hannah Beaumont of The Stubbings. Workers at the mill had used a route across adjacent fields for several decades but Beaumont, who had recently come into possession of the land, decided to block access rights. The decision of the Bench supported the advice of the agent of the Dartmouth Estate, which was that the uncontested historic use by the workers constituted it becoming a dedicated right of way.[4]

The mill was taken over in 1854 by the Heap family of Crosland Hall at an annual lease of £145 per annum for a period of 30 years. Manufacturer Joseph Heap was a well-known supporter of the Honley Temperance Society. He was later joined in partnership with William Henry Walker — who had married Sarah Ann Heap, daughter of George Heap, in 1855 — forming Messrs. Heap and Walker.

In January 1856, the female employees of the mill were treated to a Saturday evening tea party at the Coach and Horses Inn, Honley. Around 50 to 60 employees "sat down to enjoy the cup that cheers."[5]

Torrential rain in late January 1868 resulted in widespread flooding in the district, including "considerable damage ... to the goods and she attached to the mill."[6]

In July 1868, the mill's steam engine broke "with a tremendous crash", bringing work at the mill to a standstill. Five of the six arms of the flywheel broke and one wall of the engine house was demolished. It was subsequently ascertained that the engine, which had a rated horsepower of 16, was being driven at around 70 horsepower.

Along with workers from two other nearby mills, workmen from Lord's Mill were treated to a day trip to Scarborough by their employers. They reportedly returned to Netherton Station at around 11pm, "without having had any mishap to mar the pleasures of the day."[7]

The firm of Messrs. Heap and Walker was dissolved in 1873, following William H. Walker's retirement.[8] It business continued as John Heap Brothers.

Heavy rains in September 1877 led to further floods — and the death of nine-year-old Hugh Dyson Darcy at Folly Hall — and work was suspended at Lord's Mill when "the bottom rooms were nearly a foot deep in water." The wooden bridge next to the mill was washed away and "the fields on both sides [of the Mag Brook] were under water for about an hour."[9]

By 1884, John Heap Brothers were in financial difficulties and a meeting of their creditors was held at the rooms of the Incorporated Law Society, Imperial Arcade, Huddersfield, on Wednesday 7 May 1884. The debtors offered to pay 6s. 8d in the pound, which the creditors decided to accept.[10]

The mill stood empty for a period in the mid-1880s before Netherton silk dyer George Oldham took over the lease. In turn, he then advertised space for rent in the mill.

On 1 August 1952, a fire broke out on the top floor of the mill, severely damage the roof and a large section of the mill. A date stone in the northern gable marks the rebuilding of the mill in 1953.[11]

The mill was subsequently occupied by the Magdale Spinning Company Limited and Magdale Textiles Limited, but currently stands derelict.

Lord's Mill received a Grade II Listing in August 1983 and is described as:

Buildings | Listed buildings and monuments | Mills
This page was last modified on 12 August 2018 and has been edited by Dave Pattern.