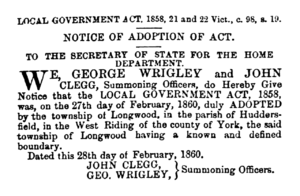 Longwood Local Board was the local authority body primarily responsible for issues relating to public health in the township of Longwood and was formed on 27 February 1860 following a meeting at Spark Hall.

The last meeting of the local board was held on Wednesday 22 October 1890 at the Mechanics' Hall.[1]