Lockwood Viaduct is a major viaduct on the Penistone Line which crosses over the River Holme and measures 476 yards in length.[1] At least three workmen were killed in accidents during the construction.

The viaduct was designed by noted civil engineer John Hawkshaw for the Huddersfield & Sheffield Junction Railway Company, which was formed to build a line between Huddersfield and a junction on the existing Sheffield, Ashton-under-Lyne & Manchester Railway near to the station at Penistone.

The master mason was Job Hirst, son of Joshua "Red Jos" Hirst of Kirkheaton, who later built railway viaducts in India.[2] Hirst's final job was as a sub-contractor on the Ribblehead Viaduct where he died aged 57 in December 1972.[3]

The number of arches is often given as 32, 34 or 36. From north to south the viaduct comprises:

The foundation stone was laid in April 1846 by the wife of the contractor, John Shaw (of Messrs. G. Miller & Co.).[4] A wage dispute with seven workers briefly interrupted work in June 1846 until Shaw settled their claim amicably. At that point, 132 workmen were on site.

The 972,00 cubic feet of sandstone for the viaduct was quarried from the railway cutting at Berry Brow. Rather than using blocking courses which comprise layers of stone of the same height, Hawkshaw elected to use snecked rubble[5] for the arches which he noted "does not appear to have been hitherto applied to structures of magnitude, possessing such light proportions, and having at the same time, to support great pressure, and resist the vibration caused by the passing of railway trains, travelling at high velocities."[6]

Hawkshaw reported that delays in construction were caused by the limited number of available stone mason and the lack of "good sand" for the mortar. The latter meant that occasionally "sandstone was ground up" to be mixed with the Halkin Mountain and Weldon Wood limes used in the mortar.[6]

A labourer from Paddock known as "Red Tom" caused an accident in October 1846 which could easily have proved fatal. He had been tasked with digging foundations but ignored warnings to not dig near a wooden crane used to lift heavy stones. A group of four men — named "Quin, Carey, Mitchell, and Sykes"[7] — were raising a stone when one of the crane's supporting legs gave way as a result of "Red Tom"'s digging, and the men tumbled 32 feet to the ground. Newspapers reported that none were seriously injured and that "Red Tom" absconded "and has not since been at the works" since the incident.[8]

In March 1847, labourer Robert Marshall (known as "Old Bob") was killed when a large stone fell onto him whilst he was working at the Dungeon Wood end of the viaduct. On the same day, two other accidents occurred including a labourer breaking his leg whilst working on the viaduct.[9]

The keying in of the first arch took place during a ceremony on Friday 20 August 1847 "in the presence of a large assemblage of spectators". Afterwards, the workmen "were plentifully regaled with beer" at the expense of contractor John Shaw.[10]

In September 1847, Irish labourer Miles Kilmartin (aged 29) fell over 50 feet whilst working on the viaduct. He was taken to Huddersfield Infirmary where he died, leaving "a young wife and two small children to mourn their irreparable loss".[11]

In June 1848, five men working on "fixing the centres for the arches upon the Berry Brow side" fell when the board the were standing on tilted. Four escaped with only minor injuries, but a "young man named Holroyd fell with the back of his head against a large stone" and was killed immediately. An inquest at the Shoulder of Mutton returned a verdict of "accidentally killed by falling from off the viaduct".[12]

John Hawkshaw's "Engineer's Report" of 28 August 1848 to the 24th half-yearly meeting of the L&YR company noted that "four arches of the Lockwood viaduct are turned and the remainder are in progress".[13] By mid-November, all of the arches had been turned.[14]

By the start of March 1849, Hawkshaw was able to report that the "Penistone and Denby Dale viaducts are completed, and the Lockwood viaduct only wants the parapet".[15]

The line opened to passenger traffic on 1 July 1850.

Throwing a Cricket Ball over the Viaduct 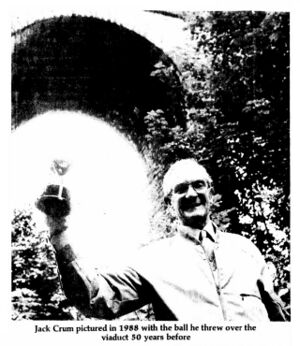 The first fully-verified report of a person repeatedly throwing a cricket ball over the viaduct was Jack Crum of Armitage Bridge who managed the feat twice on Saturday 10 September 1938 in front of around 60 spectators.[16] It was estimated that a ball needed to be thrown at least 180 feet in height in order to clear the viaduct. At the time, the Huddersfield Examiner reported:[17]

He started 20 yards back, ran seven paces and hurled the ball, clearing a height of 129ft and a span of 30ft. Such was the enormity of his throw, spectators said that had there been a house perched on top of the viaduct it would have cleared that too.

In a letter published in the Leeds Mercury in 1937, 78-year-old Green Thewlis recounted that he had witnessed Allen Hill of Lascelles Hall and Lancashire fast bowler John "Jack" Crossland both throw a cricket ball over the viaduct.[18] Although Thewlis did not give the year in which this feat occurred, in 1912 H. Sykes of Lockwood Cricket Club deduced that Crossland's throw must have taken place during a match against Batley Cricket Club on Saturday 4 July 1874.[19] According to some sources, Crossland was stood on a barrel from the nearby Lockwood Brewery when he made the successful throw in order to ensure he couldn't take a run up before the throw.

Railway historian Neil Fraser has cast doubt on the legend that the South Yorkshire service once arrived into Bradford station where a cricket ball from Lockwood was found in an empty compartment, having been thrown in via the open carriage window.[20]

Driving a Golf Ball over the Viaduct

A number of newspapers reported the following story in January 1898:[21]

Alec Herd is reported to have performed a notable feat the other day in driving a golf ball over the Lockwood Viaduct, near Huddersfield. The viaduct is said to be 223 feet high, and Herd cleared the railway at the second attempt. With another dozen balls he got over one in each couple.

The History of Lockwood and North Crosland (1980) by Brian Clarke:

Lockwood viaduct, which is surely the most impressive construction in our area, was built of the stone removed from the Berry Brow cutting. The stone used, when cut and dressed amounted to some 972,000 cubic feet. At its highest point the viaduct is 122 feet above the river and 136 feet from the foundation base, tall enough to tuck the tower on Castle Hill underneath most of the 34 arches. Each pier is 1’-1” thick at base, tapering to 4’-6” at the top and the rail bed (or road) is 28 feet wide. The pressure of all this masonry amounts to 8 tons per square foot at the base of the tallest piers. Construction of the viaduct began in late 1846 and was completed in March 1849 at a total cost of £33,000. By today’s standards and inflation, the cost is equal to about £½ million. Another comparison is that Huddersfield Parish Church had been built a few years earlier and with all its fine carvings and expensive fittings, had cost £10,000, all of which gives some idea of the massive work involved on what today is still the largest piece of railway viaduct in the country.

Listed buildings and monuments | Railway viaducts
This page was last modified on 6 November 2022, at 10:30.