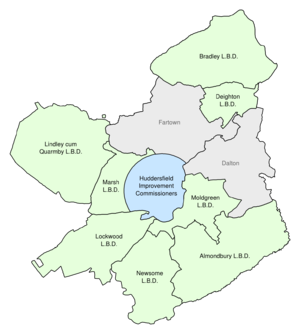 Lockwood Local Board was the local authority body primarily responsible for issues relating to public health in the township of Lockwood and was formed on 5 February 1863 with an initial membership of twelve persons.

Meetings were held as early as November 1859 to discuss ways in which an improved water supply could be obtained for the township and one of the options raised was to create a local board under the terms of the Local Government Act 1858.[1] However, it would be a further three years before a local board was formed.

The first elections for the local board took place on Wednesday 3 June 1863, with the following results:[2]

The first meeting took place on Monday 8 June 1863 with Joseph Crosland as the chairman. At a special meeting held on Monday 22 June at the Red Lion Inn, Joe Webb Tempest[3] was appointed the clerk to the local board.[4]

The final meeting of Lockwood Local Board took place on Monday 31 August 1868.[5]

The Lockwood Local Board District was abolished on 7 September 1868 when the township became an individual ward within the new Municipal Borough of Huddersfield.

The extent of the local board district is given below and included two detached areas of the Township of South Crosland (shaded red).