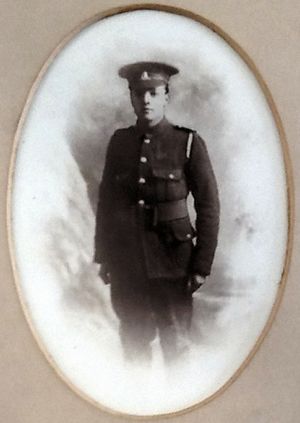 Lochburn Fisher[1] was the son of Samuel and Emily Fisher, of Bank Farm, Briestfield, Dewsbury.

In the 1890s, before their children were born, the Fishers lived along the Halifax Road at number 67. Samuel worked in a "wagon shop" and Emily was a mender of worsted cloth. Samuel was from Breistfield near Dewsbury, but Emily was a local woman.

By 1901 the Fishers were lodging with an older couple called Dyson, at Coal Pit Lane, Mount (now Moorlands Road). They had two sons: Lochburn who was eight years old, and Allen Alfred who was only four months. Samuel worked as a mason's labourer.

Number 53 Wellington Street, where they were living in 1911, had only four rooms. Out of a total of six children they had lost three young, including young Allen Alfred. Along with Lochburn there was Aronis Ann aged 13 and Lewis who was eight years old.

Father's fortunes had improved: in 1911 Samuel Fisher was a "Tramway Motor Man", presumably working on Huddersfield's tram network. Like many in Wellington Street, Lochburn, then aged 18, worked in the textile industry and was a healder in the pattern room at Martin's Wellington Mills. This may be when he joined the Young Men's Bible Class at St. Stephen's.

In the spring of 1914 the family moved to Blackpool but it was back to Halifax Lockburn returned in order to enlist in the Dukes 2nd Battalion in August 1914.

The battalion returned from Dublin as soon as war began and landed in France on 16 August. After basic training, Lockburn arrived in France on 17 March 1915. He died fifteen days later died on April Fools Day, and is buried in Tuilries Cemetery, Ypres, with 78 others. 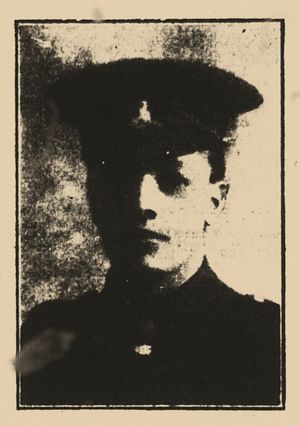 News reached Huddersfield when a neighbour on Wellington Street, a Mr Hunter, received a letter that was reported in the Huddersfield Examiner on 16 April.

By the end of then War the Fishers were were living back in Breistfield, Dewsbury, where Samuel had been born.

Lockburn is remembered at St. Stephen's church and on the memorial at the Baptist church on Oakes Road at the top of Wellington Street. This may suggest that his parents were Baptists, though it may have served as a memorial for the neighbourhood of Wellington St as well as for church members. Lockburn was certainly remembered on the Bible Class memorial produced at St. Stephen's.