The Huddersfield Literary and Scientific Society was formed in 1857 and was eventually subsumed into Huddersfield Technical School in 1884. 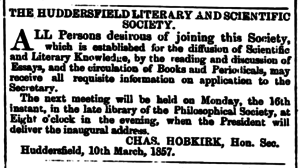 The first meeting of the society took place on 2 March 1857 at the schoolrooms of St. Paul's Church, Huddersfield, with G.H. Taylor in the chair. The Huddersfield Chronicle reported that Taylor "made a few remarks on the benefits to be derived from a society for literary and scientific pursuits, and hoped that the young men of the town would embrace the opportunity" before then reading out the rules and electing the relevant officers for the year.[1]

The first president of the society was local surgeon George Winter Rhodes.

The inaugural meeting took place two weeks later on 16 March at the Philosophical Hall, where Rhodes delivered the opening address. He urged members to study the natural sciences practically and "not to meddle with any of the pseudo-sciences". Following the address, there was an "interesting discussion" on Dalton's Atomic Theory[2], and also on the relationship between cause and effect.[3]

Many of the early meetings took place in a "room over Mr. Brown's shop, corner of Market Place."

A number of the papers and essays presented at the meetings were then published in print, including: 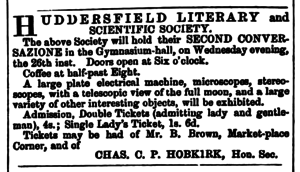 The society's second conversazione was held on 26 January 1859.

The third conversazione took place on 24 March 1860 at the Philosophical Hall. As well as a considerable number of exhibits, including over 200 fossils belonging to Mr. Sam Learoyd, around 20 microscopes had been set up in which visitors could view blood cells, vegetable substances, milk, etc. Around 30 stereoscopes displayed, including "a most splendid stereoscopic view of the full moon."[4]

The fourth conversazione was held on 21 February 1861 at the Philosophical Hall. Again, a large number of stereoscopes had been set up so that visitors could view stereoscopic images of scenes including Nubia, Palestine, Spain and Switzerland. George Jarmain of Almondbury conducting a number of chemistry experiments. Of particular interest was a new technique for creating transparencies on glass, exhibited by Major Kirby.[5] 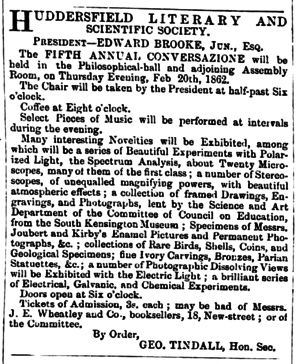 In August 1861, David E. Brown died aged only 23 after contracting yellow fever whilst at sea. He had been one of the founding members of the society.[6]

The fifth conversazione was held on 20 February 1862 at the Philosophical Hall. The Chronicle reported that extra rooms had been used to make more space for exhibits and visitors. The centrepiece of the exhibition was a water feature supported on an imitation granite, from which "the water spouted in playful streams." Mr. G. Jarmain demonstrated "spectrum analysis" using apparatus lent by Professor Dalzell of Edinburgh whilst discussing the latest findings by Gustav Kirchhoff and Robert Bunsen on spectroscopy. Elsewhere, Messrs. Barratt and J. Wormall gave a number of demonstrations with electricity. The main welcoming speech was given by Bentley Shaw.[7]

In August 1862, society members attended a picnic on the grounds of Walton Hall, Wakefield, having first rambled through the woods.[8]

The sixth conversazione took place on 11 February 1863 at the Philosophical Hall. Cyril Dunderdale of Manchester had loaned a collection of telegraphic equipment which he demonstrated. The welcome speech was delivered by Edward Brooke jnr, the current president of the society. Following the speech, George Jarmain ("professor of chemistry at Huddersfield College") conducted experiments in galvanism whilst photograph J. Holroyd of Buxton Road took portraits of visitors with the aid of electric light.[9] 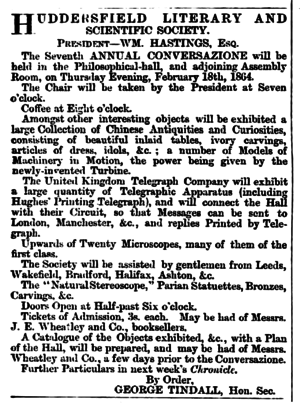 The seventh conversazione occurred on 25 February 1864. Of interest were a series of portraits of Aborigines, "curious specimens of Chinese dress and carvings", and "a novel application of electricity as a fire alarm".[10] The events continued to be held annually until at least 1867.

By 1866, a subgroup of the members had formed the Huddersfield Microscopic Society, with the Rev. T.R. Jones as president.[11]

The annual report in 1867 noted that the membership had increased to 246 people although the number of attendees at meetings had been disappointing.[12]

The winter season for 1867/68 began with a "microscopic soiree" featuring 22 microscopes and included a sample of the dry rot fungus that had "recently destroyed a portion of the flooring in Brunswick Street Schools". A demonstration was also given of an induction coil "containing 6 miles of wire" that was capable of "giving a six-inch spark" in the air.[13]

The eleventh conversazione, held in 1868, featured Professor Tyndall's "musical flames". The Chronicle reported that "a flame is produced by the ignition of hydrogen gas, and above it tubes of various lengths and diameters were held by Mr. Marriott, and these tubes emitted sounds, caused by the ascension of the flame."[14]

The first of a season of monthly summer meetings started on 25 May 1868 in which members were encouraged to bringing "any objects or facts of scientific interest". The Chronicle reported that this initially meeting "was considered to be one of the most interesting and successful which the society has ever held."[15]

The twelfth conversazione, held in February 1869, featured the latest in domestic appliances for women — a knitting machine and a sewing machine.[16]

The 1870 conversazione featured a "delightful performance" by the Reed Band of the 5th Dragoon Guards. Also of note was an experiment in which a large soap bubble was illuminated with electric light for "at least five minutes" and "the colours were most gorgeous."[17]

In May 1871, the society decided to move from their room at Wellington Hall, Queen Street, to the Mission Chapel on South Street.[18] The cost of the property meant that the society was in debt for several years until 1876, although they were able to recoup some of the costs by letting out the rooms for other meetings.

In August 1872, the society wrote to Henry Morton Stanley in the hope that he might speak to the society on the topic of his "African adventures and the discovery of Dr. Livingstone." Although Stanley replied that he was busy at the moment, "some time in November I shall be at leisure."[19]

By 1874, the society's president was Dr. James Spottiswoode Cameron.

By the early 1880s, the membership had declined to the extent that the society found itself in debt. In their 1882 report, president Samuel Learoyd reported that the annual expenditure had been £72, which resulted in the society now being £30 in debt.[20]

In October 1884, Charles Hobkirk was honoured at a evening event held at the George Hotel, Huddersfield. Hobkirk had recently moved to Dewsbury and was presented with a "very handsome silver tea and coffee service" from members of the Literary and Scientific Society, the Huddersfield Naturalists' Society, and the Huddersfield Paxton Society.

Towards the end of 1884, the society ceased to exist "as a separate institution" and was merged with the Technical School. Speaking at the first meeting after the merger, Mr. George Brook "thought that they could do more good [...] by becoming part of the Technical School" and that they "hoped to interest many of the students both in their lecturers and the museum which it was proposed should be established in connection with the school."[21]

The leasehold on the society's former property on South Street was auctioned on Tuesday 28 April 1885 with the following description:

The premises comprise a lecture hall 88ft. 6in. by 21ft. 3in., lofty, well lighted, and headed by hot water pipes ; carekeeper's cottage in the basement. Also large room 82ft. 9in. by 17ft., opening from the lecture hall, and four classrooms over same.

The premises are conveniently situated, and well suited for any religious denomination requiring a small church or schoolrooms, or for club purposes.

The following is based on reports from the Huddersfield Chronicle.