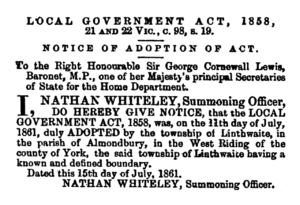 Linthwaite Local Board was formed on 11 July 1861 under the terms of the Local Government Act to represent the three hamlets in the township of Linthwaite.

The first elected members of the board were:

Milnsbridge, situated in Lower Linthwaite, prospered during the 1860s and this led to a failed attempt by the local ratepayers to break away from the Local Board in 1865.

The Local Board ceased to exist at the end of 1894 and was replaced by the Linthwaite Urban District Council, which met for the first time on 31 December 1894.[2]