Lingards (also recorded as "Lingarths") is a former township and formed part of the chapelry of Slaithwaite in the Parish of Almondbury. It mostly comprised moorland and included Deer Hill Reservoir. 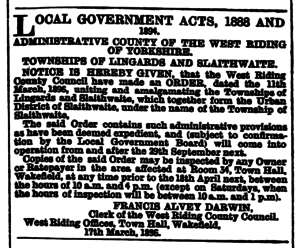 The civil parish of Lingards was abolished on 30 September 1896 and became part of an enlarged Slaithwaite civil parish.[1] Prior to that, it had representation on the Slaithwaite Local Board (formed 1862).[2] Slaithwaite Urban District Council had also submitted a proposal to amalgamate portions Golcar and Linthwaite at the same time as Lingards, but that was rejected by the Boundaries Committee.[3]

Extract from A Topographical Dictionary of England (1848) edited by Samuel Lewis:

LINGARTHS, a township, in the parish of Almondbury, union of Huddersfield, Upper division of the wapentake of Agbrigg, W. riding of York, 5¼ miles (S. W. by W.) from Huddersfield; containing 801 inhabitants. The township comprises 526a. 36p., the property of the Earl of Dartmouth, who is lord of the manor; the surface is hilly, affording good moorland pasture, and the substratum abounds with stone of excellent quality for building and paving. The village is small, the surrounding scenery pleasing, and the township contains part of the village of Slaithwaite, in which most of the population reside.

Extract from Imperial Gazetteer of England and Wales (1872) edited by John Marius Wilson:

LINGARDS, or LINGARTHS, a township in Almondbury parish, W. R. Yorkshire; 3½ miles S of Huddersfield. Acres, 500. Pop., 783. Houses, 149. The township forms part of Slaithwaite chapelry, and partakes in the interests of Slaithwaite village and township.

The extent of the township of Lingards (compiled from O.S. maps of the early 1890s) is shown below.

Parish of Almondbury | Places | Townships and Chapelries
This page was last modified on 15 September 2018, at 10:45.