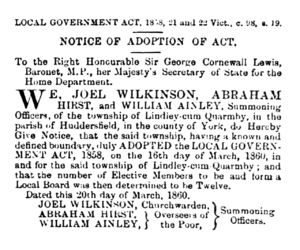 The final meeting of Lindley-cum-Quarmby Local Board took place on Wednesday 2 September 1868.[1]

The Lindley-cum-Quarmby Local Board District was abolished on 7 September 1868 when the township became an individual ward within the new Municipal Borough of Huddersfield.