The Meltham and Meltham Mills Liberal Association had formed in 1876 and regularly met at the Odd Fellows' Hall in Meltham. By the early 1890s, their finances were such that they proposed to built a Liberal Club and local architect William Carter was appointed. Carter advertised for a builder in April 1894.[1] 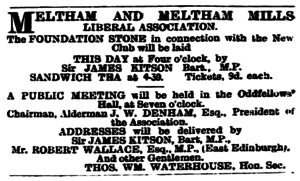 On 14 July 1894, the foundation stone of the new liberal club in Meltham was laid by Sir James Kitson, M.P.[2]

A bazaar was held at the club in February 1896, which raised around £245. Amongst the reported attractions were the Midget Minstrels and "some skirt dancing by a number of young girls."[3]

James Kitson returned in November 1896 to formally open the new Club. The Chronicle reported that the building had a public hall which could house between 300 to 400 people, and that it has cost £1,648 7s. 9d. towards which £918 had already been raised.[4]

A "tea and ball" was held at the club in January 1899 for the purpose of raising money to buy pottery. The Chronicle reported a good attendance, with dance music provided by the Meltham Premier Band, and that around £14 had been raised.[5]

By 1914, the Meltham Women's Liberal Association were regularly meeting at the Liberal Club.[6]

Buildings | Public houses and inns in Meltham | Social and political clubs
This page was last modified on 4 February 2020, at 16:13.