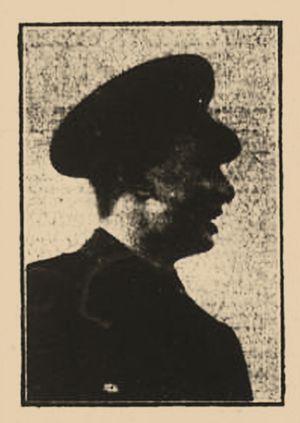 Son of Norman and Gertrude Crowther, of Viso House, Huddersfield

Leslie Taylor Crowther was one the few officers among Lindley's war dead. He first joined 5th Battalion of the Duke of Wellington's in 1909 and was an N.C.O. and one of the first to volunteer to serve abroad when the war began.

The family lived down towards Edgerton in one of the big house on Sunny Bank Road. In fact their house could boast eight rooms when many Lindley men came from larger families living in three or fewer rooms, in the terraces around the centre of the village. And as befitted a family of their status, they employed a live-in cook and maid.

Though they never claimed to be born in the village but in Huddersfield proper, Lindley was their parish and Leslie Taylor was baptised in St. Stephen's on 15 December 1892, when he was just three months old.

However the Sykes' prosperity did not protect them from loss: by 1911 Norman and Gertrude had been married 21 years and had eight children, of whom two had died.

Leslie attended Wild's, a private school in Huddersfield and when he left taught there for a time. His former master later wrote: "Leslie was such a splendid boy, so vigorous and cheerful, so conscientious and reliable ... winning the respect of all with whom he had to deal".

While Leslie was described as a schoolmaster his two older brothers, Ronald and Bernard, aged 19 and 20 in 1911 were, even at that young age, like their father, "woollen manufacturers". In his spare time he played hockey at Armitage Bridge for the Huddersfield club and also played cricket.

Leslie enlisted in the local Territorials, the 5th Duke of Wellington's in 1911 and had risen to the rank of sergeant when the war began. By this time he was employed as a laboratory assistant at Read, Holliday and Sons.

Gazetted 2nd Lieut. on the 21 Oct 1914 after he volunteered to serve abroad, Leslie went to France with the 1/5th Battalion in April 1915, sailing from Folkestone, along with many other Lindley men.

Second Lieutenant is the most junior officer in the British Army and in the First World War was one of the most dangerous roles. Duties included leading patrols in No Man's Land and advancing at the head of the men in offensives. German marksmen particularly targeted officers, so much so, that many discarded their traditional belting and carried rifles so as not to stand out. The attrition rate among junior officers was very high and life expectancy at the front short.

Leslie died having asked to join a small reconnaissance night patrol in No Man's Land. At some 120 yards they encountered two enemy patrols and the second threw a hand grenade that killed Leslie. His body was retrieved and he was buried the same day with other members of his regiment, near an old school friend, 2nd Lieut. L.M. Tetlow. A large number of officers and men attended the funeral.

Leslie was in France for no more than two months before he died and is buried in a cemetery in the village of Fleurbaix, not far from Armentieres and Lille. Many of the graves were relocated there after the Armistice. Almost half the 898 burials are unidentified. In addition there are ten German graves.

Speaking to the Huddersfield Examiner after his son had died, Norman Crowther quoted Leslie's C.O. describing him as "a thoroughly efficient officer and keen soldier ... always keen to go patrolling and did his work well" and he was "popular with his men".

Leslie is remembered in St. Stephen's as is his neighbour on Sunny Bank Road, Hefford Ainley, who died serving in the artillery, almost 18 months after Leslie.

The following letter was written by Private FREDDIE SMITH, of No 16 Platoon, 'D' Company, 1/5th Battalion, writing home to his parents who lived at 22 Stoney Cross Street, Lockwood, on the 19.6.1915, 'Lieutenant Crowther was especially popular with his men. On Tuesday 15.6.1915 he was out on patrol accompanied by Captain Stott, Lieutenant Liddel and Corporal Convoy when they went straight into a German patrol of six men and a bomb thrower. One of them instantly hurled a highly explosive detonator, which killed Lieutenant Crowther instantly. Lieutenant Liddel who was nearest to Lieutenant Crowther immediately emptied his revolver on the Germans who took to their heels making for the trenches. The remainder of the patrol acting with great gallantry returned for assistance taking back stretcher-bearers and carried back the dead Lieutenant under heavy rifle fire. Lieutenant Crowther was buried opposite the battalion headquarters, the service being conducted by the Colonel.'