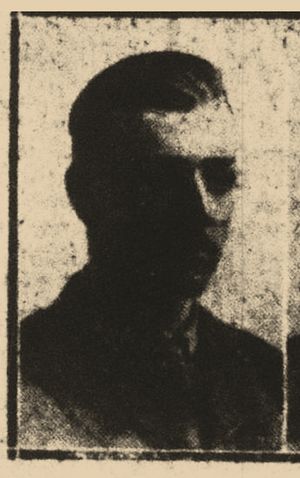 Leslie Gordon Sykes is one of the few officers on our list and the only member of the Royal Flying Corps among the Lindley dead.

To say that the Sykes family were an important Lindley family is to understate the case. They were significant local employers: the English Card Clothing Company on Acre Street began as domestic manufacturing making carding products for woollen cloth production, and by 1900 many of the Lindley men worked for them. Eventually they operated a vast factory and had a cotton-spinning mill opposite where the HRI now stands.

In the centre of the village was Field Head House, the home of JN Sykes and stands opposite the Liberal club he helped finance, the recreation ground he gave to the village and most famously, the Clock Tower.

The Clock Tower, and Norman Terrace, a row of houses built by Sykes for his workers and lived-in by a few of his workers, was designed by Sykes nephew, the Manchester architect, Edgar Wood. At one cottage lived Arnold Dyson, a foreman at the Card works, who lost a son near Ypres in 1915.

Wood also designed Briarcourt, perhaps Lindley's most distinctive of houses, which was intended as a wedding gift from John Sykes, of Acre House, to his son, Herbert Higginson Sykes. Herbert Higginson married Annie Elizabeth Thompson in Manchester in 1895 and the young family was in residence at Briar Court by the 1901 census.

Briarcourt stands some way down Occupation Rd in large grounds that were once well laid out gardens fully in keeping with the grandeur of the house itself. It was, and to some extent remains, that kind of road. At the top was the Sykes-sponsored Liberal Club and clock tower.

At Briarcourt, Herbert Higginson, who gave his occupation as "Card Clothing Manufacturer", lived with his daughter Eilein aged 4, and son Leslie Gordon, aged 2, and three servants, a maid, a cook and a nurse - one English, one Welsh and one Scottish. And the house was big enough to easily accommodate them all.

Their wealth did not protect them from the loss many others in the village faced: they had a total of four children but one died in infancy.

Interestingly, in 1911 the Sykes family were resident in Colwyn Bay in North Wales with another child, Audrey Monica, born in 1908, their parents, John and Elizabeth Sykes, five servants, but no Leslie Gordon or Eilein. It is probable that the family were on holiday, temporarily renting a property. Herbert still describes himself as a "Card Clothing Manufacturer" and there is no suggestion that, at 41, he had retired.[1]

At the time of the census, Leslie seems to have been staying with, his maternal grandparents Joseph, a "Provision Merchant" and Rose Thompson and their two children and five servants in their large house in Manchester.

Lesley attended Aldro School, Eastbourne and the Uppingham Public School, where he would have been a member of the Combined Cadet Force alongside boys such as Edward Brittain, the brother of the writer Vera, and her fiancé Roland Leighton, both of whom died in the war.[2] The school headmaster was renown for the fierce patriotism he instilled in the pupils. Lesley left the school in December 1914.[3]

Leslie's father had been a Territorial officer with the rank of Lt. Colonel so it is not surprising he was keen to enlist as soon as possible and joined the Huddersfield Artillery Brigade when it was formed in May 1915, though of course, he was too young to go to France with the battery so transferred to another battery, finally arriving at the Front in July 1916.

Leslie served as 2nd Lieutenant, that most junior officer rank, in France with the artillery. Possibly in search of further excitement he volunteered for the fledgling Royal Flying Corps and this testifies to his bravery: the machines themselves were not over reliable and aerial combat was a deadly business and no longer chivalrous by that stage of the war. Young pilots could expect to live no longer than young officers in the firing line.

However, Leslie never saw action as a fighter pilot. He was killed in a DH6 B2835 training aircraft, a plane notoriously difficult to handle, while at 190 Night Training Squadron, in Newmarket, Suffolk. He was nineteen years old.

Leslie was buried with full military honours in Lindley churchyard and is remembered inside on the war memorial. Leslie is also remembered on the memorial at Uppingham School,

Leslie's father, Herbert Higginson Sykes, had died in September 1916, and his mother Annie two years after Leslie in December 1920. All correspondence with the Commonwealth War Graves Commission was undertaken by Leslie's sister, Eilein, who had married Willaim Tozer of the steel manufacturing family in 1919, and lived in Eccleshall, Sheffield.

Interestingly, Leslie's war medals and his "Soldier's penny" were recently sold by auctioneers Spink for over £300. Someone, somehow had kept the three items together for almost 100 years,

SYKES, LESLIE GORDON. Second Lieutenant. 168th (Huddersfield) Brigade, Royal Field Artillery, attached 190th (Night) Training Squadron, Royal Flying Corps. Born June 1898. Son of Lieutenant Colonel Herbert H Sykes and Mrs Sykes, Briarcourt, Lindley, and grandson of the late Mr John Sykes, of Acre House, Lindley. Educated at Aldro School, Eastbourne, and Uppingham Public School, which he left in December, 1914. Enlisted in the Huddersfield Artillery Brigade on its formation in May, 1915, and went through training with them but, on account of his youth, he was unable to proceed with them to the front. He was transferred to another Battery and later served at the front from July, 1916, to November, 1917. He was then transferred to the R.F.C. and had been training with them at Upwood, Cambridgeshire. Died from a compound fracture of the skull and laceration of the brain caused by falling to the ground whilst flying his aeroplane on 22.3.1918, aged 19 years. Buried with full military honours in St. STEPHEN’S CHURCHYARD, LINDLEY. Grave location:- in North-East corner.

Flying Fatality at Newmarket.
A coroner's jury at Newmarket today returned a verdict of "Accidental death" on the body of Second-Lieutenant Leslie Gordon Sykes, R.F.C., aged 19, of Huddersfield, who fell some 500 feet with his machine near the Newmarket Waterworks yesterday afternoon. The jury expressed their sympathy with the relatives, and handed their fees to the Red Cross.