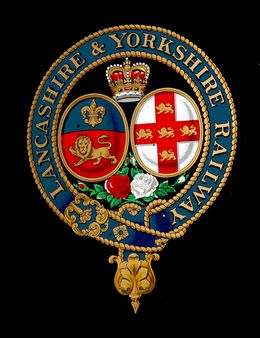 The Lancashire & Yorkshire Railway Company (L&YR) was a major British railway company which was formed in July 1847 from an amalgamation of three existing companies:

The Manchester & Leeds Railway had previously acquired the Huddersfield & Sheffield Junction Railway in July 1846, which was a new line linking Penistone to Huddersfield.

Around the same time as the L&YR was formed, the rival London & North Western Railway Company (L&NWR) had acquired the Huddersfield & Manchester Railway & Canal Company (then under construction) which would provide them with a more direct link between Manchester and Leeds than the L&YR's earlier route though the Upper Calder Valley. However, the L&YR's ownership of the former AS&LJR meant that they had control over the Huddersfield & Manchester Railway's route between Manchester and Stalybridge.

As a further complication, through an earlier Act of Parliament that had gained Royal Assent in July 1846, the two companies that had been building lines to Huddersfield had agreed to share ownership of Huddersfield Railway Station as well as the section of railway from Springwood Junction to the station. However, even with that agreement in place, the L&YR's Penistone to Huddersfield line would suffer from being physically unconnected to the rest of the company's network.

Under the circumstances, the L&NWR and L&YR both gained from mutual cooperation and various arrangements relating to running powers over each others' lines were agreed upon, including:

Also known as the Grouping Act, the Railways Act 1921 sought to make the railways more efficient by amalgamating the majority of the existing companies together into four groups — dubbed "The Big Four".

A selection of the L&NWR lines are highlighted in red: