Kilnhouse Bank is an historic settlement in the township of Cartworth in the Holme Valley near Holmfirth. Its origins are unclear but it was certainly in existence by 1502[1] as there is an entry in the Manor of Wakefield Court Rolls for that year concerning a ‘John Brodehedd de Kilnehousbanke’.[2] In the early 19th century the settlement was known as Holmbridge Bank or simply Bank.[3]

Place names within the Holme Valley containing the word ‘kiln’ are not uncommon e.g. Kylnacre (Austonley) mentioned in 1306 in the manor court rolls. This location still exists as Kiln Acre.

These ‘kyln’ locations would probably have been the site of a drying kiln for the drying and processing of oats prior to grinding into oatmeal. The use of drying kilns for this common upland grain, as well as for other cereals such as rye and barley, was widespread during the Middle Ages and continued to be used until recent times. The damp climate of northern upland cereal growing areas would have left the harvested grain too moist to grind into flour without further drying by heat.

No examples of these early corn drying kilns have been found in the Huddersfield area to date. In other parts of the UK where corn drying kilns have been excavated, they are often in close proximity to the mills where the grain would be ground into flour. The nearest corn grinding mill to Kilnhouse Bank in the medieval period was the Cartworth manorial mill, situated near the centre of Holmfirth, but by the 16th century there were corn mills nearer at hand at Hinchliffe Mill and elsewhere. Processed grain would be dried locally to where it was harvested and carried to the mill for grinding or perhaps, carried home for illicit grinding nearby.

The actual physical appearance of the kilns in our area can only be speculative but in other areas of the UK several corn drying kilns have been excavated. One such example from Scotland was made of wattle and daub within a timber framed structure and had a peat covered roof. The open fire was made on the floor within the building in order to generate the necessary heat for drying and has been known ignite the whole structure and cause its destruction.

Other examples have been of stone with a stone built oven type chamber and flue where the fire was kept, and had a temporary wooden drying floor above. It is most unlikely that stone buildings were used in the Holme Valley and a timber framed structure being the most likely form.[4]

Corn drying kilns were usually freestanding buildings due to the fire risk they presented but the form does vary across the country from field based seasonal structures where the fire kiln was supplemented with wooden drying floors annually as the crop was harvested to permanent structures associated with corn mills for industrial use.

During the industrial textile producing period in the 18th and 19th centuries there were many drying stoves, kilns or ovens built and operated as part of textile weaving communities in this area where lengths of woollen cloth could be dried following one of the processes such as fulling or dyeing. Using a warm air flow created from an internal fireplace was more reliable and controllable than the more traditional ‘tentering’ in open fields. Remarkably, one of these early stoves or kilns survives here at Kilnhouse Bank, but as these cloth drying houses were a late invention of the industrial revolution it has no bearing on the origins of the place-name.

By the 1800s most of the settlements in the Holme Valley were engaged in textile production in one form or another and the inhabitants of Kilnhouse Bank were no exception. There is a record in the Wakefield Manor Court Rolls of 1829 detailing the transfer of ownership of two dyehouses at Kilnhouse Bank[5] , and the census of 1851 shows most of the male inhabitants described as ‘hand loom weavers’.

The earliest OS map surveyed in 1850 and published in 1854 shows the location and distribution of buildings in this small community and it remains virtually unchanged today. 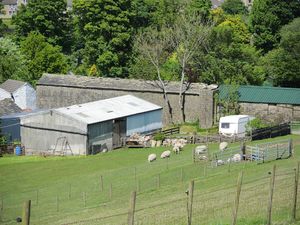 The cloth drying stove, probably dating from the first half of the 19th century[6], is an interesting survival from the days of small scale cloth production, and would once have been commonplace in these Pennine weavers hill settlements. Few have survived demolition or conversion to other uses so this one here at Kilnhouse Bank is a treasure. However, the building must not be approached, as it is both unsafe and also on private property, but it can be seen from the public footpath that runs up the hillside above the settlement. The chimney from the internal fire would have risen to twice the height of the building originally but has been reduced many years ago to its current height at roof level due to safety fears. Otherwise the building is pretty much still intact as it is shown in the 1852 OS map and the staggered raised roof ridge tiles can still be seen which would have allowed venting of the warm air within.

The word "house" was commonly applied to all kinds of buildings, whether or not they were dwelling-houses and it is likely that "kilnhouse" in this case is simply a more elaborate form of "kiln". Actually the combination of "kiln" and "house", both frequently used in their own right, is not at all common: it does occur though more than once in Wakefield manor and one "house called a kylnehous" was referred to in Hepworth in 1538. The Cartworth locality has been a settlement site for at least 500 years and in the 16th century was associated principally with families called Broadhead and Crosland.