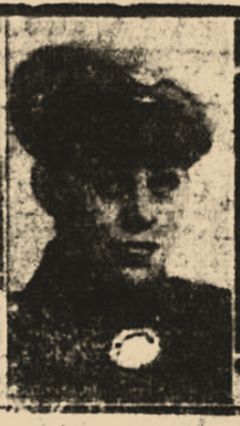 Kenneth Ely Crossland is not remembered on the War memorial in St. Stephen's but his name is on the list of those locally who served and it is marked with a cross, signifying that the died.

Kenneth's mother, Amy was tragically twice widowed. Born the daughter of Richard and Martha Hirst in Huddersfield in about 1871, the family were living in Liversedge, where her father worked as a cloth dresser, in 1881. Some time in the late 1880s the family moved to Lindley where Richard became the landlord of the Imperial Inn on Lidget Street in the centre of Lindley.

Sadly, Richard died on 14 January 1891 leaving an estate of some £560. The family — Martha, son Robert (age 36) and five daughters, aged between 34 and 17 (another son, George, had already left home) — moved to Baker Street in time for the census in April of that year. Robert worked as a tripe dresser and the girls worked in mills, Amy as a mender.

On 8 September 1898, Amy married Joe William Ely, a clerk from Moldgreen, at St. Stephen's, Lindley, her parish church. Her brother, Richard was one of the witnesses. She gave her trade as "cloth finisher". A year later, on 29 September, Kenneth was born.

By 1901 Joe, Amy and Kenneth were living on Victoria Street, Dalton. In early 1905, when Kenneth was no more than six year of age, Joe died leaving Amy a widow at the age of thirty-four.

The following year, on 4 August, Amy married Frank Crossland, a hand loom pattern weaver, at St. Andrew's church. On this occasion, her brother George was a witness. She gave her occupation as "worsted mender", which suggests that as widow, she was working to support Kenneth, who by then was at school. She gave her address as 6 Beaumont Street, in Moldgreen. A daughter, Elsie, was born in November 1906. A boy, John, followed in June 1908 and was baptised in St. Andrew's. The couple gave their address as Victoria Street, back on the same road where Amy had lived with Joe.

Frank died in early 1911 just before the census at the age of only 45, and Amy was left widowed for the second time. The couple must have moved to Lindley because Kenneth attended Oakes Council School on Wellington Street and in the April census Amy, Kenneth, Elsie and John were living at Ing Terrace, 257 New Hey Road, which is just east of Plover Road and is the address Amy would later give the War Graves Commission.

Widowhood forced Amy to apply for Poor Relief and she was awarded six shillings a week with which to raise her three children.

After leaving school Kenneth, who seems to have taken Frank's surname, worked at the Sykes factory on Acre Street eventually becoming a card machine tenter. Too young to enlist when the war began in August 1914, Kenneth was called up in October 1917 and served in the King's Own Yorkshire Light Infantry. He was killed just eight months later, on 20 June 1918 and is buried at the Bienvillers Military Cemetery, eighteen kilometres south-west of Arras.

Although not on the memorial at St Stephen's, Kenneth is included on the Roll of Honour of those who were serving, compiled at the church during the war. Kenneth is remembered at the Salendine Nook Baptist Church.