Joshua Eastwood was a Meltham cotton manufacturer and a partner in the firm of John Eastwood & Sons.

By 1850 he was the president of the Meltham Mechanics' Institute, a post he held for 5 years.[1] 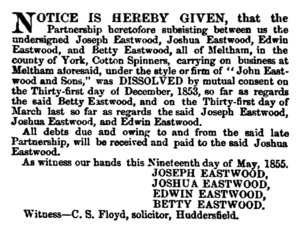 The partnership known as "John Eastwood and Sons", with his brothers Edwin and Joseph, and their widowed sister-in-law Betty, was dissolved at the end of 1853.

Joshua Eastwood died aged 54 and was buried on 22 December 1855 at St. Bartholomew, Meltham.

Death of Joshua Eastwood, Esq. — The demise of Mr. Eastwood has cast a gloom over the inhabitants of Meltham, by whom the deceased was held in high estimation, on account of his good qualities both as a private and public character. Deceased was an active and leading partner in the firm of John Eastwood and Sons, cotton spinners Meltham, and in that capacity he endeared himself to all those with whom he had to do, and by whom his loss is severely felt. In public matters the deceased's conduct has been also highly appreciated; and especially as guardian of the poor, in which capacity he served for many years, and was vice chairman of the Board of Guardians a great part of the time. During this period the, question of a union workhouse was frequently agitated and at the first, Mr. Eastwood was opposed to a workhouse; but ultimately he was of a different opinion; and latterly contended that a workhouse would be advantageous in two points of view; viz.:— "It would be better for the poor, and cheaper to the ratepayers." Deceased served in all the other parochial offices with great credit to himself and advantage to the public of Meltham, so much so, as to cause them to conclude that they will not soon "look upon his like again." Deceased also was a commissioner of assessed taxes, &c., in which capacity he acquitted himself with great credit.