Joseph Oxley was a tailor and cab proprietor.

He married Sarah Heywood (or Hayward) in 1841 and they had four known children: 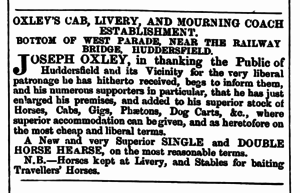 At the time of Ann and Benjamin's baptisms in the 1840s, Joseph gave his occupation as a tailor of West Parade. However, he soon became a cab proprietor, likely with his stables being situated in Oxley's Yard on Westgate. Newspaper advertisements describe his business being located at the "bottom of West Parade, near the Railway Bridge."

He was the owner of the Old Hat beerhouse on West Parade and tried several times to obtain a full licence before being successful at the Brewster Sessions of 1855.

By 1861, he was a widower residing on South Street, Huddersfield, with his son Benjamin.