Joseph Kaye was responsible for building many of the most well-known buildings in Huddersfield during the period 1802 to 1856, including the railway station, Britannia Buildings, George Hotel, St. Paul's Church, Queen Street Wesleyan Methodist Church and the Huddersfield Infirmary, as well as churches in South Crosland, Linthwaite, Golcar, Lindley, Paddock and Birkenshaw. 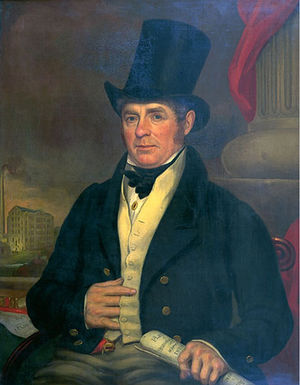 He was born around 1779, the son of innkeeper and stonemason John Kaye.[1]

It seems likely that both his parents died soon after, leaving Joseph and his brother John orphans, and that he was raised by relatives. John appears to have followed in his father's footsteps by taking over the licence of the Masons Arms, whereas Joseph apparently became an apprentice builder.[2]

His first major commission was Thornton Lodge, built around 1803 for local merchant John Horsfall, who had purchased around 30 acres of Longroyd Bridge.[3]

Joseph Kaye married Hannah Rigg on 6 February 1803 at Huddersfield Parish Church and they had at least seven children, some of whom died in infancy. Hannah passed away in January 1836, aged 53.