Joseph Crosland was a printer, bookbinder and stationer of Upper Bridge, Holmfirth.

He married Sarah Harrop on 27 April 1828 at Ashton-under-Lyne.

The 1851 Census recorded him as a "bookseller, printer and stamp distributor" of Upper Bridge, Holmfirth. 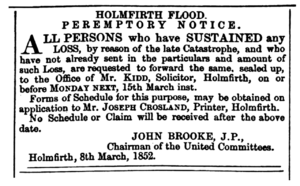 Following the devasting flood of 5 February 1852, Joseph was one of the jurors at the subsequent inquest. As a local printer, he also provided forms for those wishing to make claims.[1]

He also published a memorial sheet headed "The Flood came, and took them all away [...] In memory of the following unfortunate individuals, who perished by the lamentable occurrence which took place about one o’clock on Thursday morning, the fifth of February, 1852, by the bursting of the Bilberry reservoir, situate about three miles above Holmfirth" which contained a list of the victims' names.[2]