Johnsons Wellfield is an extant quarrying company based at Crosland Hill, Lockwood. 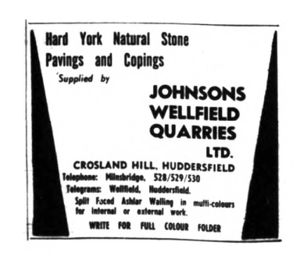 The History of Lockwood and North Crosland (1980) by Brian Clarke:

This Company commenced operation in 1895 and now is the largest quarry in our area. The firm was in a relatively small way until 1912 when Mr. H.F. Johnson became manager and under his direction the firm began to grow in size. At this time a monumental department was opened but this section was cut back in 1926 due to the increasing use of Italian marble for this type of work. However, the Second World War closed the market to the Italians and the firm again expanded in this field in 1940 and has continued to flourish since. The Company employs skilled sculptors who produce very fine carved work for various types of monuments, from simple grave markers to city centre war memorials. In 1927 the Company began operations at Wellfield and this now covers a very large area. Apart from the raw materials for the monumental business, two products come from the quarry, building stone and crushed stone. The crushed stone is obtained from the trap rock which is blasted away to uncover the ashlar stone beneath. The trap rock is removed from the quarry floor by dumper type motor vehicles, although originally a narrow gauge railway was used. On the surface the stone is off-loaded onto a conveyor system leading through the crushing plant where it is converted into various sizes ranging from large rubble for motorway foundations, medium pieces for sewage filtration plants, small chips for road surfacing, down to fine sand for use in cement work. The ashlar stone bed is of an average 45 feet thickness and is cut from the face, lifted to the quarry top by a system of overlapping cranes and then fed to gigantic saws for cutting to the required size. York stone is in demand throughout Britain and Johnsons have supplied stone for building work at Liverpool Cathedral, Leeds University, Queen Margaret’s School, Scarborough, Edinburgh University, Oldham Civic Centre and, nearer to home, the Victoria Inn on Lockwood Road.

Companies | Quarrying companies
This page was last modified on 28 May 2020 and has been edited by Dave Pattern.