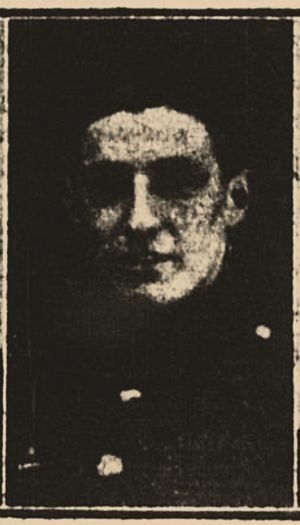 John Wagstaff was born in 1893 in the Newtown area of Huddersfield and baptized in St. Andrew's Church on Leeds Road on 13 December. His father Joseph was an agricultural labourer's son originally from Spalding in Lincolnshire; his mother Emma (née Tyas) came from Huddersfield. They had married in St. Peter's, Huddersfield, in November 1889.

In the 1911 census, Joseph and Emma would say they had lost one child in infancy and a number of children surnamed Wagstaff were born in 1890 and died soon after but it is impossible to be sure which was their child; John arrive some four years into the marriage. Another child, Mary Elizabeth arrived six years later and Annie and Charlie were born in 1903 and 1905 respectively.

In 1901 the family were living at 18 East Street, a two-roomed house in the centre of Lindley, and John attended Lindley Church of England School on Holly Bank Road, just down George Street from his home. Joseph was working as a "Fettler, Woollen Mill" which meant he had some skill at machine mending.

Ten years later the family had moved away from the village to the hamlet of Hill Top, with a larger family in one more room.[1]

In 1911 John was working as a cloth finisher; may be for some excitement he enlisted 10 July that year in the Territorial Force — the Milnsbridge battalion of the Duke of Wellington's, the 7th — hence his low Service Number. His commanding officer was William Umpleby Rothery, a senior manager at Sykes card making company at Acre Mills, who lived at Brunswick House on East Street.

John probably thought life as a Territorial would make a change from his everyday routine, with annual camp and regular parades. His medical conducted on 11 July 1911 showed him to be 5' 4½" tall, with a 31" chest, of "good" physical development and vision. He was then working at Crowther Brothers in Milnsbridge and was still there when war broke out.

Being a Territorial he was away at camp when the country went to war. The local battalions of the Duke's T.F. were immediately sent to Lincolnshire to guard the Humber estuary and the coast. An appeal was made for men to volunteer to serve overseas — the T.F. were firstly a defence force — and most agreed. John signed his agreement on 9 September 1914.

Along with other local Territorial battalions, with many Lindley men among them, the 1/7th sailed for France on the SS Manchester Importer on 14 April 1915. Before this, John had been promoted Corporal. By this time the Wagstaffs had moved to Cliffe End, Longwood and among their neighbours were the Pogsons who son John was also in the 7th Battalion on 14 April, who also died in action.

Sadly, John William did not serve at the Front for long but was killed by a sniper on 1 October 1915. His commanding officer, Major Rothery wrote to John's parents the following day and that may have been the first they heard of the tragedy. He told them that John had died instantly and had been buried at a nearby cemetery by the Brigade Chaplain. He wrote: "His death was a blow to me as he was one of the very few old members of the Milnsbridge Company". He realized it was no comfort, he said, but John gave his life fighting for his country.

John was buried at the Bard Cottage Cemetery, Boesighe, Belgium, Locally, he is remembered at Salendine Nook Baptist Church and at St. Mark's in Longwood. On the same memorials is John Pogson, of Cliffe End, who along with his brother, also died.

His parents received a letter from Major W U Rothery, who wrote on the 2.10.1915, 'I am extremely sorry to inform you that your son was killed yesterday. He was in charge of the bombers and after a successful sniping shot he received a bullet through the head. I saw him immediately afterwards and death was instantenous. He was buried in our cemetery last night by the Brigade Chaplain and his grave will be marked with a cross. His death is a blow to me as he was one of the very few old members of the Milnsbridge Company and I knew him intimately. He was a good soldier and will be a great loss to the Company. I am afraid I can say nothing which will comfort you but it will be some satisfaction to you to know that he gave his life whilst actually fighting for his country. My brother Officers and the whole Company join me in offering our deepest sympathy.'