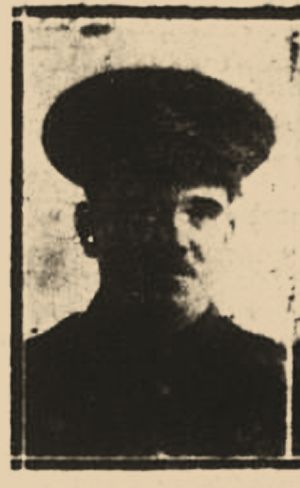 On 1 July 1876 Thomas Rhodes a stone mason and the son of a cloth finisher from Lindley, married Hannah whose father, John Hepworth of Birchencliffe, was also a cloth finisher, in St. Stephen's church in the centre of Lindley. The Rev. Town, who was to remain vicar of Lindley for another quarter of a century or so, officiated.

After marriage the couple lived for some years on Rock Road, Birchencliffe, next door to Hannah's mother and father, and by 1891 had two children: Annie Elizabeth who was aged four and Arthur who was only two years old. Another son, David, was born soon after the census. John William was born in April 1884 and baptised in St. Philip's, Birchencliffe on 18 May. Another daughter, Olive, was born in 1890.

By 1891 they had moved up to Carrs on Lindley Moor and Hannah's mother and father — John now retired — had moved with them and lived in the house next door. However, soon after the census, John Hepworth died at the age of only sixty-seven, and was buried in the grave he had purchased in the Zion Chapel graveyard in the centre of Lindley. Other tragedies followed: Annie Elizabeth died two years later in March 1893 at the age of only eighteen; in May 1896 her brother Arthur died at only seventeen. An infant, Gladys, died the following year only twenty-one months old. All were buried with their grandfather.

In 1901 time John was working as a stonemason, his father's trade. The Rhodes were back in Birchencliffe, living at 66 Briar Lane and John another sister, Elsie, born in 1892. The Rhodes' troubles were not over: Thomas died in the summer of 1905 at only fifty years of age. He was buried with his children in the Zion graveyard. He left Hannah just over £115.

Hannah's mother, Elizabeth, died in 1909 at the age of eighty-four, and was buried with her husband, grandchildren and son-in-law.

By this time John was working as a stonemason, his late father's trade, eventually working for Edward Fox, a Lindley building contractor.

Neither the Hepworths or Thomas Rhodes left very much money, however by 1910 Hannah Rhodes owned the four-roomed house she and the family lived in — 66 Briar Lane, Birchencliffe — and four other houses on nearby Rock Road, one of which was occupied by her son David, who had married in 1907. It seems likely the Rhodes had acquired at least no. 66 during Thomas's lifetime. He may have saved enough to buy the freehold.

However acquired, these properties must have given the widowed Hannah some security.

We do not know precisely what motivated John to enlist. Nor do we know when he enlisted; it may be that he put his name forward under the Derby Scheme towards the end of 1915, entering the army in early 1916. Or he may have waited for conscription. The fact that he has a five-digit number and is not in the Duke of Wellington's, the local regiment of choice, rather suggest he did not rush not the army in the early months of the war.

John served in the 2nd Battalion, the West Yorkshire Regiment — a regular army battalion — so probably sent as a replacement after initial training.

John died of bronchitis at No. 48 Casualty Clearing Station on 5 March 1917 in the Somme area. Chest infections must have been very common in the conditions of trench warfare and before antibiotics could easily become fatal.

The small amount of War Gratuity paid to David Rhodes adds weight to the suggestion that John had not been a soldier for long before he died. He is buried at the Bray Military Cemetery in the Somme region and is remembered on the memorial at his parish church, St. Philip's, Birchencliffe.

Hannah Rhodes died just over a year after her son, in October 1918, and is buried with her husband, father, mother and those of her children who pre-deceased her, except, of course, John who lies in France.