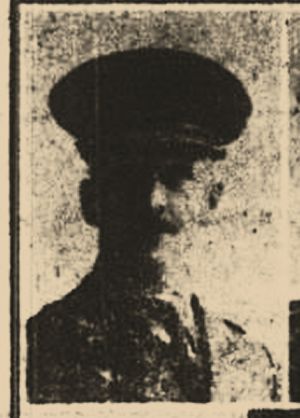 John William Holt was unique among the Lindley men: he was commissioned an officer less than two months after arriving in France in 1915.

We have no full service record for John but his medal card details when he landed in France and when he was commissioned.

John's brother Herbert, then aged 14, was a resident at the Crossley and Porter Orphan Home and School in Savile Park, Halifax — now Crossley Heath School — being educated and trained, no doubt, to a higher level than he would have received in a council school.

By 1901 Herbert was a bank clerk living with his mother in Hipperholme. Eventually he became a bank inspector.

In 1911 John was then 30 years old and lived with his wife Annie at 40 Lea Street, Lindley. John had married Annie Briggs of Brighouse in Halifax in the late summer of 1907 and they probably moved to Lindley because of John's work: he was a bank clerk.

His job must certainly have paid well as the houses on Lea Street are among the better terrace houses in the village, though he almost certainly did not own the house but rented it. Number 40 had five rooms and one imagines they were planning a family although almost four years into the marriage without children at that time, was very unusual.

A member of the Zion Chapel on Lidget Street, John became Superintendent of the Sunday School opposite the chapel.

John enlisted in the 1/4th Battalion of the local Territorial Force in November 1914. He would have served with them on coastal defences near Hull and Grimsby, then to Doncaster and arrived in France in April 1915 as a Private.

From as early as October 1914 the army had been aware of the urgent need for large numbers of new officers and senior N.C.O.s and Warrant Officers were offered commissions with little extra training. In February 1916 promotion was regularised and it was recognised that a period in the ranks was essential for officer-candidates, though membership of a school or university Cadet Corps was an acceptable alternative.

John, whose job suggests a certain level of education, was probably a good candidate for promotion from the ranks and was gazetted 2nd Lieutenant on 13 June 1915. He returned to England for training at Clipstone Camp and was made a temporary Captain on 25 June 1917. On 24th September this was made permanent and he returned to France.

The 8th Battalion did not arrive in France from Gallipoli until July 1916. On promotion to captain he may have changed battalions to meet a particular need in the 8th.

He certainly rose to a good rank for someone who started as a private only three years before he died. John was killed on the 27 August 1917, probably almost exactly three years since he joined the army. He died during the protracted Third Battle of Ypres and is buried at the Poelcapelle British Cemetery which is some 12 kms north-east of the town.

John William Holt is remembered in St. Stephen's church and in the Methodist Church on East Street where he had been a superintendent at the Sunday School.

HOLT, JOHN WILLIAM. Captain. 8th Battalion Duke of Wellington's Regiment (formerly 4th Battalion). Son of the late James Holt of Halifax and of Mrs Holt of Hipperholme, Halifax. Husband of Annie Holt, Mayroyd, Lea Street, Lindley, Huddersfield. Employed as a cashier at the West Yorkshire Bank, Huddersfield. Was Superintendent of the Lindley Zion Wesleyan Sunday School. Enlisted November, 1914, with the local Territorial battalion. Embarked for France as a Private in April, 1915. Gazetted Second Lieutenant in June, 1915. Returned to England for training at Clipstone Camp, appointed to a temporary Captaincy whilst he was at Clipstone. Gazetted Captain, 25.6.1917. Returned to France and was killed in action on 27.8.1917, aged 37 years. Buried POELCAPELLE BRITISH CEMETERY. Grave location:- Plot 35, Row B, Grave 17.