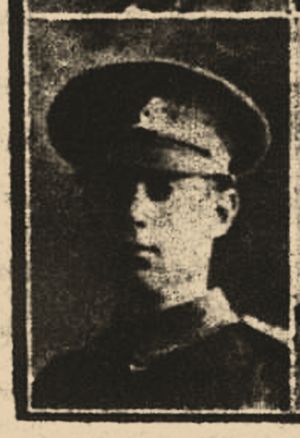 John William Gartside left his job at Wilkinson's brickworks at Blackley and enlisted in the 2/5th Battalion the West Riding Regiment (The Duke of Wellington's) at Huddersfield on 27 May 1915 like many other Lindley men did that year and was given the number, 4170. John was a volunteer in his local Territorial regiment and remained in that regiment, transferring to the 1/5th Battalion, then in France, on the 3 October 1916. Ten days later he was again transferred, this time into another regiment, the York and Lancaster.

The fact that John seems to have voluntarily entered the army, albeit during a period of heightened national outrage following the sinking of the Lusitania on 7 May, might seem surprising in light of his later brushes with military authority.

In 1901 the Gartside family lived at 3 Lidget Street and Fred worked as a "Farm Servant". He was, at the beginning of the century, 33 years old and had been born in Dobcross, his wife Sarah in nearby Diggle. They had three children, Clara age 4, John 2, and two-months-old Ben.

Ten years later they were living at 12 Briar Lane, Bichencliffe and Fred worked as a "teamer" at a brewery, which probably meant he was a drayman or delivery man, possibly at the brewery at the bottom of East Street.

The children, John William aged 12, Ben 10 and Joe aged nine, were all still at school, probably at the school on Holly Bank Rd in the centre of Lindley. Clara had died, aged 5, in 1902; in fact the family said they had lost a total of five children when young.

The house on Briar Lane had only two rooms and one cannot imagine that Fred earned much of a wage and the loss of five of their children can only have been a consequence of poverty and poor living conditions.

Sometime after John joined-up the family moved to 20 Croft House, Lindley (though this has proved difficult to locate and may be Old Lindley, or Marsh).

At his medical in Huddersfield on the day he enlisted, John was described as being 5' 3½" tall with a 33" chest that had a 2" range of expansion. His physical development was good. His signature showed a steady hand.

The 2/5th were sent to Thoreby Park, Ollerton, Nottinghamshire and was based in various camps around the midlands and the north. John was at Thoresby, Saltfleet in Licolnshire and at Clipstone Camp, near Mansfiield, the training centre in the midlands.

It was during this period, for over a year from June 1915, that John managed to get into unending trouble with the military authorities and appears to have been the most reluctant of soldiers.

Between the 11 July 1915 and 24 September 1916, John appeared before senior officers — including two Lt Cols, and a number of colonels and majors — on at least thirteen occasions. Charges range from Absence without Leave from tattoos and parades (seven times), at times overnight and once being brought back by the civil police, to "neglect of duty whilst on fatigues" and talking on parade and being insolent to a Warrant Officer.

Punishments included loss of many days pay[1], a period in isolation from which he "broke out" and was absent for two days, and periods of being confined to barracks and days in detention. John was obviously not happy as homeland soldier and may have thought that he enlisted to serve abroad.

If this was the case John got his wish when 3 October 1916 he was sent to France and then transferred to the reserve battalion of the Yorks and Lancs and given a new number, 31708. On the following day, 15 October, he was posted to the 13th Battalion, just in time for the Battle of Ancre in the Somme area.

John's indiscipline seems to have waned once he was "in the field". The one recorded incident, 6 June 1917, was when he lost a day's pay for being without his gas mask on parade or when on a work-party. Service at the front may have suited John better than life in camps back in England, when the discipline may have seemed petty. But this is speculation: life at the front was dangerous and from his arrival he was involved in offensive actions and room to go absent must have been minimal.

John was killed on 29 June 1917, soon after the end of the Battle of Arras, and is buried at Albuera Cemetery, Bailleul-Sire-Berthoult, a small graveyard that contains 243 graves, many from the battlefields of Arras. John is remembered there and on the memorials at St. Phillip's church, Birchencliffe.

Duke of Wellington's Regiment | Huddersfield and District Roll of Honour | Lindley Roll of Honour | People | York and Lancaster Regiment
This page was last modified on 17 May 2020, at 11:19.