He was born in Oxfordshire around 1845, the son of draper Henry Hatch.

Little is known of his early life, although he claimfed to have worked as a photographer in London, Oxford and Glasgow before establishing a business at 25 Buxton Road, Huddersfield, in May 1866:[1]

JOHN VINCENT HATCH (from Southwell Bros., London) respectfully begs to intimate to the inhabitants of Huddersfield and its vicinity that (having purchased the above business, formerly carried on by Messrs. T. and J. Holroyd), he will RE-OPEN the PREMISES replete with every requisite for first-class portraiture, on Tuesday next, the 1st of May, when he hopes by care and personal attention to secure a continuance of the same favors awarded to his predecessors. The experience he has gained in the best London, Oxford, and Glasgow houses, will be a sufficient guarantee of his ability to produce the most satisfactory results.

After opening the studio, Hatch regularly placed prominent notices on the front page of the Huddersfield Chronicle to promote his business until the end of 1870.

At the start of August 1868, the Huddersfield Chronicle reported on a photograph taken by Hatch:[2]

View of the Old Cherry Tree Inn. — A photographic view of the Ancient Cherry Tree Inn, Westgate, has been taken and issued by Mr. J. Vincent Hatch, Buxton Road. In the foreground of the view, which has been artistically executed, stands a group of figures, comprising many patrons on the house. Mr. Cooper, the landlord, and family ; and, in a conspicuous position, and old and respected public officer — Inspector Townend. Mr. Cooper entertained the persons who formed the group to dinner. The sketch is a good specimen of photography, and the individuals, as well as the premises, will be readily recognised. 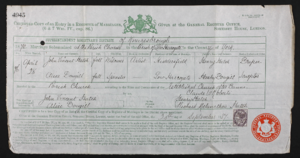 He then married Alice Dougill, daughter of the late Haxby Dougill, on 28 April 1870 at St. Mary's Church, Harrogate. They had one son:

The Chronicle reported that Hatch had taken "an excellent photographic likeness" of Charles Brook (1814-1872) of Enderby Hall shortly before his death.[4] A number of articles from this period indicate that Hatch was particularly skilled at creating oil painting portraits from photographs.[5]

In December 1872 he was granted a preliminary patent for "improvements to magic lantern slides holders".[6] The same month he "gave a very pleasing photographic entertainment" at the High Street New Connexion Chapel, projecting images of "highly interesting subjects taken from life and nature", whilst Alice Hatch "presided with considerable ability at the piano."[7] Hatch regularly gave similar demonstrations locally throughout the 1870s.

At the Grand Bazaar held in the Armoury on Ramsden Street in December 1874, Hatch "exhibited, at intervals, an orchestral musical box and piping bullfinch."[8]

For the opening of the Victoria Temperance Hall on Buxton Road, he donated "a handsome trichord grand piano, and a screen for keeping away the draught arising from one of the side doors."[9]

Hatch was invited to be the "official" photographer of the formal opening of Beaumont Park by the Duke and Duchess of Albany in October 1883. He reportedly took a number of group photographs, as well as documenting "the proceedings at the park" and also "the banquet in the Town Hall".[10]

In November 1883 it was announced that he had just finished equipping his new studio in the Byram Arcade, although the Chronicle noted that it was rather inconveniently located on the top floor of the building.[11] In December 1885 he moved from the Arcade to a new studio at 56 West Parade.[12]

His marriage broke down and, in 1887, he brought a prosecution against Alice who was charged with "stealing £85 [and] being about to leave or desert her husband." Prior to the case, the couple had begun divorce proceedings. Although the case did not go into detail about their relationship, it was stated that they slept separately. After deliberating, the magistrates decided to dismiss the case in favour of it being continued at the divorce court.[13]

The Right Honorable Sir James Hannen granted the divorce in June 1888 on grounds of Hatch's "adultery, coupled with cruelty towards" his wife. The petition from Alice stated that her husband had had an affair with two of his assistants at the studio — Sarah Leonard[14] and Annie Gillett. It was stated that Leonard had subsequently given birth to an illegitimate child[15] and that Alice had found a nude photograph of Annie "in a cupboard in the dressing room" of her husband. The divorce papers paint a picture of a violent and abusive husband.

By 1891, he had moved to 45 Stroud Green Road, Finsbury Park, London.[16] Also recorded living with him in the census of that year was Sarah Leonard and their illegitimate daughter, Fanny Kathleen Leonard (aged 7).