John Ralph Cuthbert was a well-respected cashier, bookkeeper and church deacon from Paddock who became embroiled in a scandal and committed suicide at Holme Styes Reservoir.

He was born in Huddersfield in 1844, the son of joiner and cabinet maker Thomas Cuthbert and his wife Hannah (likely née Hanson).

He married Emily Smith of Lepton on 25 August 1870 and they initially lived at Spring Wood, Huddersfield. The 1871 Census named him as a "commercial clerk" and he was in the employ of Messrs. Woodhead and Barker, woollen merchants of Dundas Street, Huddersfield. He eventually rose to the position of "head cashier".

At the time of the 1881 Census, they were living at 107 Church Street with two sons — Thomas Archibald (aged 9)[1] and John Edwards (3)[2] — and also Cuthbert's orphaned Scottish niece, Katie Greener (15), whom the couple had adopted.

The family was still living on Church Street when the 1891 Census took place. By then, they had a third child — Emily (aged 9)[3]. His occupation was given as "woollen merchant's cashier" and his niece, Katie, was still living with the family.

By now, Cuthbert had also become a respected deacon at Paddock Congregational Chapel and regularly taught at the Sunday School. 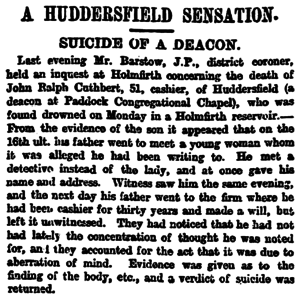 The final letter she received apparently indicated that the writer wished to meet her on the evening of Thursday 16 January 1896. Concerned for her safety, she contacted the police who suggested that she agree to the meeting. When Cuthbert arrived at the location and gave the pre-arranged signal to the woman, he was immediately arrested. However, perhaps due to his social standing, he was soon released, "pending the consideration of the nature of the proceedings to be taken against him."[4]

The next morning he went to work as usual, but disappeared at lunch time. When his desk was subsequently searched, it became apparent that Cuthbert had spent a good portion of that morning writing out his Last Will and Testament, which was found in the drawer. Other items found were reported to indicate that he intended to commit suicide.

A witness later came forward to state that he'd seen, and briefly talked to, Cuthbert near Honley on the following Wednesday (22 January). Cuthbert was last seen walking towards Holmfirth and it remains uncertain where he stayed during the intervening period.

On Saturday 22 February, 18-year-old labourer Herbert Beaumont was working in a field adjacent to Holme Styes Reservoir, south of Holmfirth, when he spotted something amongst the rocks on the banks of the reservoir — it turned out to be a "gentleman's dark grey mixture overcoat and a black silk umbrella." Beaumont took the items to Holmfirth Police Station where a "pair of brown kid gloves, a silver-mounted pipe, and tobacco pouch" were found in the overcoat pockets, along with a programme from an event held at Paddock Congregational School the previous December.

As Cuthbert had been reported missing, one of his sons was brought to Holmfirth where he identified the overcoat and umbrella as belonging to his father. It was initially reported that the items appeared to have been placed there very recently and that Cuthbert was known to have previously spent time fishing at the reservoir.[5]

Police then began dragging the reservoir, but it was feared the procedure might take several days, as it was around 60 feet deep in places. A hat was found on the first day of the search and, around 5pm on the second day, Cuthbert's body was brought to the surface.

Up to this point, it had been assumed that Cuthbert had committed suicide after having been revealed to be the anonymous letter writer, however his legs were bound with thick twine and his hands were firmly tied behind his back. The body, which had the appearance of having been in the water for up to two weeks, was taken to the Shoulder of Mutton Hotel.

The inquest took place on Wednesday 26 February at the Shoulder of Mutton, chaired by District Coroner William Barstow.

Part way through the inquest, one of the jurors was taken ill — perhaps after having viewed the body — and Barstow, keen not to delay proceedings, swore in the two newspaper journalists present as replacement jury members.[6]

Thomas Archibald Cuthbert identified the body as that of his missing father. When questioned about the indecent letters, Thomas felt that his father must have suffered an "aberration of the mind." Importantly, Thomas also stated that his father was "an expert swimmer."

Police Constable James Barker and Inspector Calcraft gave evidence and stated that the knot used to tie the deceased's hands behind his back was a slip knot, so could have been tied by Cuthbert. Pressed by the Coroner, one of them demonstrated how it could be achieved.

As to Cuthbert's state of mind, it was noted that the Will he had made out was not witnessed and therefore invalid. The jury felt that this "pointed to his mind being unhinged." As to his hands being tied behind his back, the jury felt confident Cuthbert had done this as his natural instinct would be to swim to avoid drowning.

After deliberating, the jury returned a verdict of "found drowned in Holmestyes Reservoir without mark of violence, and had drowned himself, but there was no evidence to show the state of mind at the time."

The following morning, John Ralph Cuthbert was buried at Lane Congregational Chapel, Holmfirth. His wife was reportedly "too ill to attend". Unsurprisingly, given the sensational nature of the case, a large number of spectators came to watch the burial.