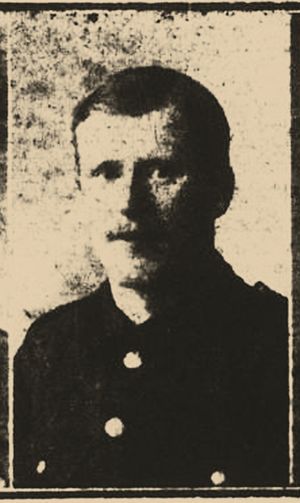 John Priestley was the son of Frances Priestley of Lindley and the late Walter Priestley.

In 1901 the family lived at no. 13 Dearne Fold, part of that tightly packed group of cottages now largely demolished, opposite the Black Bull and it seems likely that they lived there in 1896 when Annie was born. Walker, born in 1898, Frank, born in 1900 and Joe, the same age as Annie, were also all born in Lindley. And the child that did not survive infancy probably died there.

They moved to the village before John was three years and we know that John, and probably the others too, attended the church school on Holly Bank Road.

By 1911 they had moved on to West Street, possibly to a slightly bigger house. Number 21 West Street only had 4 rooms including the kitchen so the house at Dearne Fold must have been tiny. With nine people, the youngest being 10, it must have seemed crowded even to people not used to much better; with the boys in one room and the girls in another, it’s possible that mum and dad slept downstairs.

Walker Priestley — not Walter as recorded by the Commonwealth War Graves Commission — says he was born in Lancashire on the form he completed in 1911, although the handwriting suggest that perhaps the enumerator filled the form in on behalf of Walker. In 1901 his place of birth was given as Ripponden, and that he was born at Ladywell, Soyland near Ripponden, is confirmed by a member of the family. Both forms say that Frances, his wife, came from Lindley.

Walker's employment was as a "stone labourer", which cannot have paid very much so he could only have afforded a small rent. However, the family's income would have increased as the children left school and began work. The first two, Mary Ellen and Polly, were in employment as cotton piecers at the ages of 15 and 13, before the last two, Frank and young Walker, were born.

By 1911 Mary Emma had moved out — she married Enos Ainley in 1909 — and Lucy worked as a weaver; Annie was a spinner and Joe a finisher. Walker had an apprenticeship with the Co-op butcher on Lidget Street.

John had what was possibly the least skilled job: he was a farm labourer, probably working on one of the many farms that were then within easy walking distance of the village centre.

Not soon after the census tragedy struck the family: on 11 November 1912, Walker Priestly died at the age of 52. He was buried nine days later — a delay which suggests a post-mortem and an inquest — at the Wesleyan Methodist Chapel on East Street, only a few hundred yards from where the family lived.

Even with most children of working age, the loss of Walker's income must have been acutely felt by Francis: she was now totally dependent on the wages brought home by her children. On their part they were her sole means of support; there was no chance of any poor relief with their wages coming in and as a widow of 51 she would have been expected to look for work.

John soon changed jobs and went to work as a teamer for a local builder and contractor, Ben Bottomley.

John enlisted in October 1914, joining the 8th Battalion, the Duke of Wellington's, which was formed as a battalion of the New Army in Halifax in August 1914. After being stationed at Grantham and Witley in Surrey the battalion sailed for Turkey in July 1915 on board either the SS Aquitania or the Empress of Britain, On his medal card he was deemed to have arrived "in the Balkans" on 7 July 1915.

The Battalion landed at Sulva Bay 6-7 August. John was wounded in the back and lung by a shell burst on the 11 November 1915. A letter from an army chaplain explained that the surgeons on board the hospital ship, Kildonan Castle, struggled to save John, that he bore his fate well and that he prayed with him "until practically his last breathe." John died the following day having "made his peace with God" and was buried at sea.

It was almost exactly three years to the day since his father died.

John is remembered on the Helles Memorial in Turkey and at St. Stephen's church and in the Methodist Church on East Street which they probably attended and where his father is buried.

John's brother Walker, also served during the War but thankfully survived and in a an interesting end piece to the story, in August 1921, he married Emily Smith, the sister of Arnold Stott Smith, another Lindley casualty. A granddaughter still lives in the Huddersfield area.

PRIESTLEY, JOHN. Private. No 11980. 8th Battalion Duke of Wellington's Regiment. Born Lockwood 29.11.1891. Son of Mrs Priestley, 21 West Street, Lindley. Educated Lindley Church of England School. Employed as a teamer by Messrs Ben Bottomley and Sons, contractors of Lindley. Single. Enlisted October 1914. Served in the Dardenelles, where he was critically wounded on 11.11.1915. Died of his wounds on board a hospital ship, 12.11.1915, 23 years. Was buried at sea. Commemorated HELLES MEMORIAL TO THE MISSING.

An Army Chaplain wrote to Mrs Priestley on 11.11.1915 as follows, 'Private Priestley, of the Duke of Wellington's Regiment, has been wounded today. Whilst going about his work he was hit by the bursting of shrapnel in the back. He was very brave whilst the wound was being dressed and I hope he will come through it alright.' Another letter was received from the Rev. A. Parisotti, Army Chaplain, who wrote, 'No doubt when you receive this you will already have heard the sad news of his death. No doubt it will comfort you to hear how died. He was brought on board this ship (the Hospital Ship 'Kildonan Castle') from the Field Hospital with the wounded men. He was at once seen to be a serious case and the surgeons on board concentrated all their efforts upon him in the hope of saving him. It was however a hopeless task. They did all in their power, their efforts were to some extent successful in that they made him much more comfortable and he died quite peacefully. He was praying with me quietly until practically his last breath. He knew he was dying but he did not seem afraid. He just quietly made his peace with God. He asked me to write home for him – this I gladly do, feeling it to be no small honour to assist in the last moments of so fine a lad. He was shot through the lung and died from internal haemorrhage.'