John Metcalf was a civil engineer and road-builder. Despite losing his sight as a child, he was responsible for the building of around about 180 miles of turnpike road. 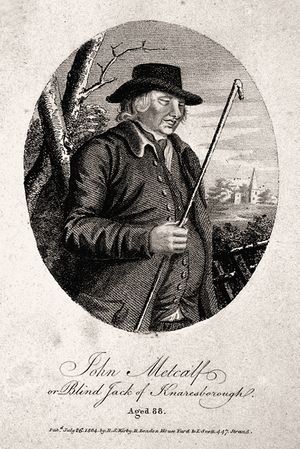 He was born on 15 August 1717 in Knaresborough, the son of a horse breeder.

He lost his eyesight aged six after contracting smallpox. Despite this, he seems to have had a natural ability for mentally mapping the environment and landscape around, to the extent he made money as a local tour guide to visitors.

By his 30s, he was an accomplished fiddle player and had reportedly walked the 190 miles to London and back. By the mid-1740s he had begun a business of carrying fish from the coast to Leeds and Manchester, which gave him further experience of roads in the north of England.

With the passing of the an Parliamentary Act to allow the building of turnpike roads, he began a new career as a road-builder and won the contract to build a three mile section of a new road between Harrogate to Boroughbridge. He explored the countryside in the area alone in order to work out the most practical route.

It is believed he built most of the Wakefield and Austerlands Turnpike road between Huddersfield and Austerlands, including a half-mile section over sodden bogs near Thieves Clough Bridge, and later built a revised section of the route west of Marsden. He also built the Halifax and Huddersfield Turnpike (now Halifax Old Road) road through Grimescar Wood to Elland in the 1770s.

After the building of the Huddersfield and Woodhead Turnpike road, business and property owner Marmaduke Hebden commissioned Metcalf to build a row of properties alongside the new road, near to the bridge over the River Colne. According to some sources, locals were of the opinion that Hebden was a fool to build housing there and the area gained its name of "Folly Hall". In the book about Metcalf's life, the properties were described as being "9 yards wide, 23 [yards] long, and 21 feet from the foundation to the square of the building, with chimneys or pipes."

Blind Jack of Knaresborough retired to Spofforth, Yorkshire, and died there on 26 April 1810 aged 92.

The epitaph on his headstone reads:

Here lies John Metcalf, one whose infant sight
Felt the dark pressure of an endless night;
Yet such the fervour of his dauntless mind,
His limbs full strung, his spirits unconfined,
That, long ere yet life’s bolder years began,
The sightless efforts mark’d th’ aspiring man;
Nor mark’d in vain—high deeds his manhood dared,
And commerce, travel, both his ardour shared.
’Twas his a guide’s unerring aid to lend—
O’er trackless wastes to bid new roads extend;
And, when rebellion reared her giant size,
’Twas his to burn with patriot enterprise;
For parting wife and babes, one pang to feel,
Then welcome danger for his country’s weal.
Reader, like him, exert thy utmost talent given!
Reader, like him, adore the bounteous hand of Heaven