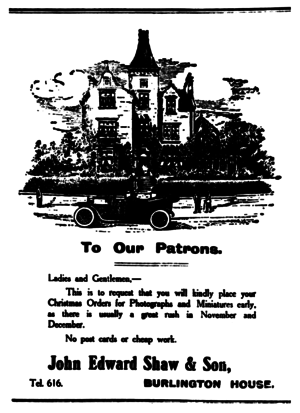 John Edward had initially established a small photographic studio at 6 South Parade circa 1877, following his marriage in 1871. By 1887, he had moved to Burlington House on Park Drive, near Greenhead Park, which provided more space. His daughter assisted in the business whilst he apprenticed his eldest son, Charles Raven.

The business flourished and Shaw's reputation as a noted photographer grew, perhaps helped by his lectures of foreign travels which were accompanied by photographs he had taken. Topics included: "Reminiscences of a spring tour in Italy" (November 1884), "Easter trip to Rome" (February 1885) and "Fjords and Fosses, or what I saw in Norway" (March 1888).

When Charles Raven came of age, the business expanded as John Edward Shaw & Son with the purchase of a new studio in Mirfield in August 1894. A further studio was opened Kensington House, Sheffield.

In May 1899, John Edward announced in the local press that the Sheffield studio would be run by his son, whilst he would dedicate his time to the Huddersfield studio at Burlington House:[1]

Ladies and Gentlemen, having transferred to my son, Charles Raven Shaw, the Business carried on during the past few years at Kensington House, Sheffield, I am now able to devote the whole of my attention to my Huddersfield Studio. Personal attendance daily from 10 a.m. to 5 p.m. Pearlatype Matte Surface Photographs and Circular Medallions are taking the lead this season. 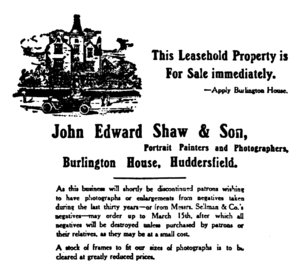 Charles Raven continued the family business and appears to have entered into partnership with another local photographer named Wilkinson.

However, in March 1917, adverts appeared in the local press announcing that the business was to be discontinued and that the leasehold on Burlington House was for sale. Patrons were advised that they had two months to order any "photographs or enlargements from negatives taken during the last thirty years."

Whilst he tried to sell the property, he took up lodgings at 27 Trinity Street. By the end of the year, it was reported that he had become "somewhat strange in manner" and was likely suffering from depression. On the evening of 18 December 1917, he left his lodgings saying he as going for a walk to "blow the cobwebs off" but did not return. As concern grew, both the police and his business partner Mr. Wilkinson were notified, and it was the latter who found the body of Charles Raven Shaw hanging in the studio at Burlington House the following morning.[2]

Companies | Photographic companies
This page was last modified on 28 May 2020 and has been edited by Dave Pattern.