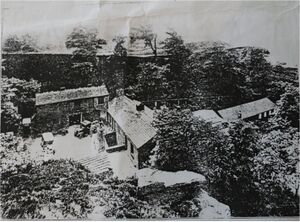 The Wapping Spring Brewery was established by farmer John Ainley (1808-1871)[1], probably in 1853.[2] The brewery made use of soft water from the nearby Wapping Spring and was situated at an area known as Wapping Nick on Lindley Moor.

Inns and public houses in the Huddersfield area believed to have been owned by the brewery include:

The brewery's Wappy Stout was held to have medicinal properties and was reportedly prescribed by local doctors to those with a "weak constitution":[9]

Some three miles out of Huddersfield, on Lindley Moor, situated in a deep ravine, partly buried in the earth, is the Wapping Spring Brewery, owned by the firm of Messrs. John Ainley and Sons. The brewery takes its name from a famous spring, formerly called Wapping Nick, whose waters emanate from the rough sandstone rock, and possess valuable medicinal properties, which make them peculiarly suitable for not only brewing purposes, but also for the manufacture of mineral and ærated waters. Our reason for directing the attention of our readers to the beverages which are made at this brewery, is that we had occasion to taste some of the same description lately and were stuck by the difference in flavour and quality. This induced us to make further enquiries concerning them, and after an exhaustive trial we came to the conclusion that Messrs. Ainley and Sons' manufacturers were equal to the best that have from time to time been brought beneath our notice, and much superior to many of a similar kind for which exorbitant prices are charged. Having made what we deem to be a valuable discovery we do not, therefore, hesitate to make the matter public for the benefit of our friends. We should not omit to state that the stout brewed here is of exceptional value, and abounds in medicinal and nourishing properties, which make it peculiarly suitable to invalids or those of weak constitution. It is frequently recommended by doctors, who state that it has undoubtedly benefited their patients.

In December 1900, the firm placed a notice in the Huddersfield Chronicle which reported on various chemical analysis of their beers and included a report from Percy S. Marshall F.C.S. that the beer was "free from arsenic"![10]

On the 7th September 1957, an article, titled, "Halifax brewery firm to buy a Huddersfield Concern" was published in the Halifax Evening Courier[11], reporting that an agreement between Samuel Webster & Sons Ltd. and John Ainley & Sons Ltd. had been reached.

The director of Webster’s, Mr. McCracken, had said that eventually the Wapping Spring Brewery, employing 14 people, would be closed, and Ainley's public houses and hotels in Huddersfield will be taken over and the 'Wappy Stout' will no longer be served.

An advertisement was placed in the Halifax Evening Courier on the 10th January 1958, listing the Wapping Springs Brewery for sale.[12]

The brewery was bought in 1958 and became a sausage skin factory and is simply marked as "works" on the 1963 O.S. map and was likely demolished soon afterwards during the construction of the M62 motorway in the late 1960s.