Joe Perkin — sometimes misnamed as "Perkins" — was a musician and conductor, arguably best known for his arrangement "Pratty Flowers", otherwise known as "The Holmfirth Anthem." 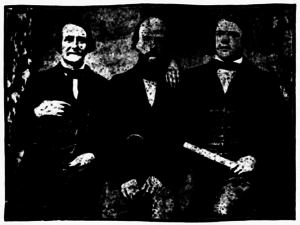 He was born in Honley in 1809, possibly on 17 January, to clothier Eli Perkin and his wife Ann (likely née Fieldsend).

His obituary article indicated that he was the leader and conductor of a choral society in Holmfirth in the mid-1830s, before being engaged as the choir master at St. James, Meltham Mills. A former pupil apparently recommended Perkin for a vacancy in the Carlisle Cathedral choir, which he reportedly joined for 2 or 3 years, before returning to Meltham — described as lame and eccentric, it was also claimed Perkins was atheist and this led to his dismissal from the choir.

According to Philip Charlesworth's research (published in the Old West Riding journal), claims by the Huddersfield Daily Examiner that Perkin left to join the Carlisle Cathedral choir in 1847 are incorrect. Instead, it 1845 and he resigned a year later to return to Meltham.

The Leeds Mercury (26/Dec/1846) reported on the return of "Mr. Parkin" to Meltham Mills where he replaced the recently deceased choir master at St. James and took up his old job at Brook family mills. To celebrate his return, "a sumptuous dinner" was given at the Rose and Crown Inn. Following the food, Perkin played violin, accompanied by Mr. Littlewood on the flute and Mr. Woodhead on the bass, and "delighted the company also with several beautiful musical compositions."

He married 36-year-old widow Eliza Bottomley (née Wood), daughter of cloth dresser William Wood, at All Hallows, Almondbury on 16 May 1847.[1]

The two Census returns found for Perkin give almost no indication of his career as a singer, musician, arranger and conductor — except for naming his first son Mendelssohn — and seem somewhat at odds with biographical details published in newspapers after his death:

After returning to live near Holfmirth, circa 1850, it seems Perkin was able to re-establish his prior links with singers in the area and also with the newly-formed Holmfirth Choral Society. By October 1856 he had become their conductor.

In November 1851, the Chronicle named Perkin as being a member of the "Cliff Harmonic Society", described as a "party of glee singers".[6]

Perkin witnessed the aftermath of the Holmfirth Flood of 1852 and, together with A.B.N. Wildman[7], wrote a commemorative song titled "Holmfirth Flood", which was published in November 1852.[8]

In January 1857, it was reported that he had been in "ill-health for some time past", and that the illness had "materially affected his circumstances" and had left him unable to sing.[9] 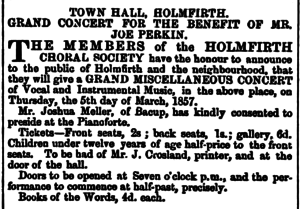 The Choral Society held a "grand miscellaneous concert" on Thursday 5 March 1857 to raise money for Perkin, with the Chronicle stating that, "all lovers of music in the neighbourhood will thus have an opportunity of testifying their sympathy for this talented musician in a practical shape, and there is no doubt the result will be very gratifying."[9] The concert was a sell-out, with many turned away at the door.

Although it is tempting to think that "Pratty Flowers", which was commissioned in 1857, may have debuted at the concert, it was not mentioned in the detailed write up by the Huddersfield Chronicle.

By January 1858, he had also been persuaded to become the conductor of the Meltham and Meltham Mills Choral Society, which had been formed during the summer of 1857 under the patronage of Charles Brook Jnr.[10]

In September 1859, the Chronicle reported that Mr. M. Rollinson of Kirkburton had taken over as the conductor of the Holmfirth Choral Society, following "the resignation of Mr. Perkin."[11]

Cookson Stephenson Floyd, one of the founding patrons of the Holmfirth Choral Society, died on 12 September 1859. At his memorial service, a funeral anthem arranged by Perkin was performed, along with portions of Handel's "Messiah". Perkin conducted the music of the service and the Chronicle reported that the mourners "came to pay a musical tribute to the memory of a worthy man".[12]

Eliza Perkin later lived in the Holmlfirth Almshouses, which had been built on Station Road in 1856 on land donated by C.S. Floyd to commemorate the 1852 flood. She died in April 1903, aged 86, (possibly at the Huddersfield Union Workhouse, Honley) and was buried on 21 April alongside her husband and two of her sons at Holy Trinity, Holmfirth.

Their son, Mendelssohn, married in 1872 but his wife died the following year, shortly after the birth of their daughter, Everelda Perkin. He worked as weaver (1881 Census) before claiming to be a "professor of music" on the 1891 Census. He was reportedly an itinerant fiddler, but had ended up living in the Holmfirth Almshouses by 1898 and died in Deanhouse Workhouse in 1911.

The following partial list is compiled from newspaper articles, with publication dates where known.