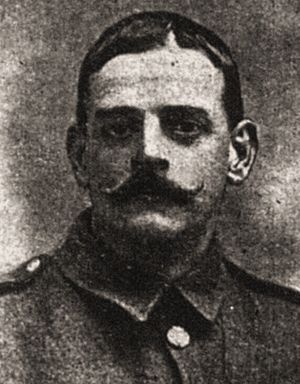 Courtesy of IWM Lives of the First World War:

James Bridge was born to Samuel and Ann Bridge in Bury, Lancashire on 23 April 1886 and baptised 28 May 1886 at All Saints, Elton, Lancashire.

On the 1911 census, he is living with his widowed mother and two siblings at 146 Walshaw Road, Bury. He is aged 24, single and his occupation is shown as labourer in a Papermakers.

Before enlisting, he lived at Church Terrace, Holmfirth and was employed at the Valley Dyeworks, Holmfirth.

He enlisted in 1915 and died of wounds in France & Flanders on 27 April 1916. His family received a brief, official letter from the Infantry Record Office in York: "It is our painful duty to inform you that a report has this day been received from the War office, notifying the death of No.3/11469 Private James Bridge, West Riding Regiment."

The local paper reported on his death with the following article: "This week relatives of Pte James Bridge Church Terrace, Holmfirth, have received from the Infantry Record Office, York. Private Bridge died of wounds received in action April 27th. The deceased soldier who had lived in Holmfirth for about eight years before going to the colours, enlisted in His Majesty’s Forces about 18 months ago. Having resided in the district for about 14 years, he was well known. A sturdy young man, tall, he looked well in his regimentals."

9th Battalion, Duke of Wellington's Regiment | Huddersfield and District Roll of Honour | People
This page was last modified on 17 May 2020, at 11:15.