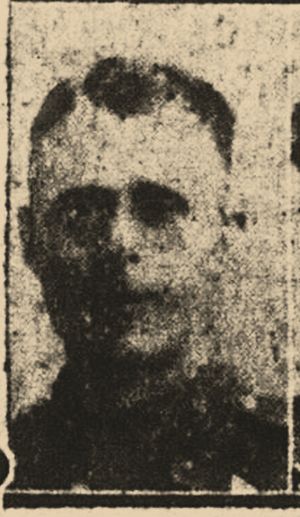 James was born in 1885 and his father Frederick, aged 50 in 1901, was a wheelwright working for himself at home and employing his eldest son, Charles, born 1881, as well as his third son, Ernest, born 1887, as an apprentice. James Arthur, who was 15 in 1901 and therefore no longer at school, was working as a ‘woollen cloth warehouseman’ the occupation he later put on his army attestation form; by then he was working for Messrs O. Raynor and Co, West Parade, in the town centre,

The youngest brother, Willie, who would later also lose his life in the War, born on 12 September 1890, was only ten years old in 1901 and still at school, though the census does not make this clear. Both James and Willie attended the church school across Holly Bank Road, little more than a minute’s walk from their house.

The whole family, including mother, Ann, 49, were born in Lindley. James and Ann Lindley had married in the High St Chapel, Huddersfield, on 20 April 1878.

They were living at 12 Lidget Street next door to the Fleece public house. Their other neighbour was described as ‘out of employment’. Three doors away was a ‘Designer of Worsted Fabrics’, who said he was born in America, and was prosperous enough to employ a servant. At number 14, lived Nancy Sutcliffe whose son Frank, age 22, was a wheelwright, presumably working for his neighbour, Frederick.

When Willie was baptized at the Zion Chapel opposite on Lidget Street, on 7 December 1891 (he had been born in the September) the Brays gave their address as Holly Bank Road and they did own a workshop at the top of Holly Bank.

All the Bray children seem to have attended the Zion Sunday School opposite the chapel on Lidget Street, James for two years from his sixth birthday in 1891.

By 1911 their address was given as 14 Lidget Street. Both 12 and 14 and others were owned by Mary Alice Sykes, of Field House, daughter of the late James Neald Sykes of the card making business. Number 14 Lidget Street was also the address on James’ attestation form.

By 1911 Ernest had become a ‘Brass Finisher’ and Willie, now 20, was, like James, working as a ‘Woollen Warehouseman’. Charles had married in 1905 and lived with his wife Ethel and two children at 12 Holly Bank Road, the house that backed onto the family house on Lidget Street, with his wife Ethel and two children. He no longer worked as a wheelwright but as a packer in a brass works, presumably at the same place as his brother, Ernest. James was working for a ‘Woollen Merchant’, rather than a ‘Manufacturer’ like his brother.

The 1911 Census also reveals that Frederick and Ann had, in total, six children of whom five were still living. Since Charles was 20 in 1901, when Frederick was 50, it seems likely that the oldest had already moved out. Their house had four rooms, including the kitchen. This suggests a two-up-two-down cottage, which must certainly felt cramped when four sons were living there in 1901.

However the household decreased in May 1913 when at St Stephen’s, Ernest married Agnes Moore of Victoria Street and moved out.

James took the oath for military service, probably under the Derby Scheme, on 4 December 1915 at Huddersfield into the Royal Garrison Artillery, (No. 133490) although he was not taken into the army until a year later on 14 December 1916 at the R.G.A. Depot at South Camp, Ripon. James’ signature suggests a confident, mature hand that would not look out of place today. His enlistment was witnessed by Andrew Barret, the clerk at the enlistment office, and his attesting officer was Captain Wrigley, who swore-in many other Lindley men.

February 1917 saw him at the R.G.A. camp at Broughty Ferry, Dundee, presumably for training. In March he was a gunner in the 383 Siege Battery and a year later was with the battery in the Middle East. He contracted pneumonia and died on the 7 November 1918, just four days before the Armistice and the end of the war. He is buried in Jerusalem. He was 32 years old and had served for thirty-five months.

His death was so late in the war and unexpected that he was put on the Absent Voters List for Lindley as a serving soldier.

His brother Willie enlisted in the 2/5th Battalion, the Duke of Wellington's on 20 March 1916.

Willie died in Fargo Hospital, Rollestone Camp, Wiltshire of thrombosis, on the 31 May 1916, some six months before James actually entered the army. Willie died without leaving the country and is remembered on the Edgerton Memorial and according to Commonwealth War Graves Commission records, was buried in the Zion Chapel graveyard in Lindley with full military honours, though the grave disappeared in the re-organising of the graveyard

Willie is remembered, alongside his brother, on the St Stephen’s memorial. Both are included in the Zion Roll of Honour. His death was noted in the Zion Sunday School Register. It said: ‘died... at Salisbury Camp’.

The Zion graveyard lay across Holly Bank Road from where the Brays lived on Lidget Street and is now a pleasant footpath.