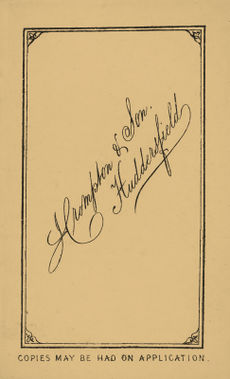 Crompton & Son were a photographic business based at 2 Bath Buildings, Huddersfield, and comprising John Crompton and his son William.

John Crompton was born in Leeds circa 1819.

He married Emily Mary Denham in 1864 in Huddersfield.

The 1861 Census recorded John as a "schoolmaster and Methodist local preacher" residing at 2 Bath Buildings with his family. By the 1871 Census, his profession had become a "photographic artist", together with his son William (aged 24).

By 1881, the family had moved to Margate where James' occupation was recorded in the census as "photographer and local preacher". The 1891 Census shows a change of occupation to "tea agent" and, by 1901, James was a "retired schoolmaster" living together with his wife at their son-in-law's house at Minster, Kent.

It seems likely James Crompton died in 1901, shortly after the census was taken.

William Crompton also moved to Kent with his wife Martha and was working as an assurance agent at the time of the 1891 Census.