The Ivy Hotel — originally known as the Ivy House Inn and The Ivy — is a former inn on Manchester Road (formerly Wakefield and Austerlands Turnpike) in Linthwaite, situated at an area known locally as "Smith Ryding".

The inn gained notoriety when a teenage Welsh servant girl, Catherine Dennis, was found murdered there on the afternoon of 21 August 1891.

In July 1853, weaver William Garside was charged with assaulting slubber William Thorpe at the Ivy House. The Leeds Mercury reported that Garside was known as a "great fighter" and "had often been before the Bench at Huddersfield". He was fined £5, out of which 10s. was awarded to Thorpe "as some compensation for the injuries he has sustained."[2]

By 1873, Charles Brook, and his wife Margaret, were running the Ivy Hotel. Mrs. Brook[6] took over the licence in 1883 following her husband's death.

Tenders were requested in August 1876 for the construction of "a shed and out-offices". The latter is likely the lower single-storey building attached to the right-hand side of the inn.[7]

In March 1877, weaver J. Garside was charged with assaulting weaver Thomas Dyson, apparently over a bet made on a pigeon race. Witnesses were produced who claimed no assault had taken place, so the case was dismissed.[8] 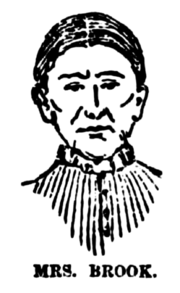 In December 1887, one of the Brook's sons was one of several people prosecuted by the RSPCA for cruelty to a horse. He failed to turn up to the hearing and the magistrates were told that he'd absconded and gone to America.[9]

On the afternoon of 21 August 1891, Mrs. Brook left 15-year-old Catherine Dennis in charge of the inn whilst she went to Huddersfield with her grandsons. During her absence, local farm labourer James Stockwell murdered the servant girl. After going on the run, he was eventually arrested and found guilty of the crime.

Mrs. Brook felt unable to continue to live at the Ivy Hotel and a successful temporary application to transfer the licence to Linthwaite local councillor and rate collector William Hayes (c.1862-1911)[10] was made on 15 September 1891.[11] Hayes also took charge of the public subscription to erect a gravestone to commemorate the murdered girl.[12]

Road surveyor Edwin Smithies was fined 10s. with 10s. 6d costs in April 1893 for "being disorderly and refusing to quit the licensed premises of the Ivy Hotel."[13] In September that year, landlord William Hayes was charged with selling adulterated whisky. Hayes was of the opinion that the equipment used to do the testing must have been defective.[14]

The Colne Valley Cycling Club were reported to be based at the Ivy Hotel in 1895.[15]

At a Local Council District meeting in June 1896, landlord and councillor William Hayes, was accused by the sanitary inspector of having a pig sty within 40 feet of the Ivy Hotel. Other councillors moved that Hayes be served with a "notice to abate the nuisance."[16]

A partial history of the licensees includes the following:[18]

The owning brewery was Bentley & Shaw Ltd. of Lockwood, until the 1960s when the Ivy became a Bass pub.

The building is now a private residence.

Buildings | Licensed premises on the Wakefield and Austerlands Turnpike (West) | Public houses, beerhouses, inns, etc. | Public houses and inns in Linthwaite
This page was last modified on 17 September 2019, at 20:29.