The Isle of Skye was a former inn on the Greenfield and Shepley Lane Head Turnpike (Greenfield Road), sited near the junction with Wessenden Head Road, at a height of around 1,500 feet above sea level. It stood on the southern side of the road and was inside the boundary of the township of Upperthong.

Some postcards described it as "The Highest Inn in Yorkshire" at 1,477 feet above sea level, however that accolade is normally claimed by the Tan Hill Inn in North Yorkshire at 1,732 feet.

The name Isle of Skye was sometimes also used to refer to the Wessenden Head Inn that was situated on the northern side of Greenfield Road in the township of Austonley. This earlier premises was in existence by 1835 but appears to have ceased being an inn circa 1860. 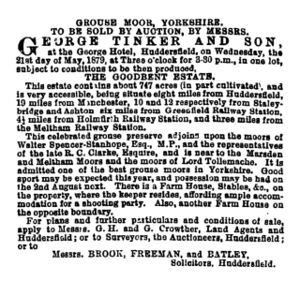 Included in the estate was a farmhouse marked as "Wessenden Head or Isle of Skye" on the first O.S. map of 1854 which the brewery adapted for use as a licensed premises in time for the upcoming shooting season. An application was made to the Brewster Sessions in August 1879 to allow Wilford Tinker to transfer his licence from the nearby Shepherds Boy beerhouse to the new premises. To improve the chances of the application succeeding, the brewery stated that it would close the Rose and Crown Inn in the Netherthong township. The application was approved but the brewery's request for a spirit licence was refused.

Tinker applied at the 1881 Brewster Sessions for a full licence, but was refused. In his application it was stated that the inn had a room that could accommodate 100 people and had stabling for 10 horses:[3]

It was situated in a district, the charms of which were known and appreciated by almost everybody residing in this part of England. Many persons flocked thither for the benefit of their health, to enjoy the scenery or engage in sport, and it would be of benefit if they found that a spirit licence was granted to the house, there not being any other place of the sort nearer than Wood Cottage (a considerable distance off) on one aide, and the inn at Meltham on the other. The house had been much improved during the last 12 months — was commodious, had good stabling, roomy coachhouses, and all the accessories of a first-class inn.

Eli Brooke took over the beerhouse on 6 March 1883 and successfully applied for a full innkeepers licence at the Brewster Sessions of 1884. Subsequent known dates of licence transfers are:

During the construction of the Digley Reservoir in the 1940s, the Huddersfield Waterworks Committee announced that the hotel might have to close before the work was completed as it stood within the reservoir's catchment area and there were concerns about sewage from the property polluting the water.

Despite being given nearly a decade to resolve the drainage issues, no improvements were made and solicitors acting for the inn's owner — Hammond's Brewery of Bradford — gave notice at the start of 1955 that "the cost of providing a sewage disposal scheme would be uneconomic".[4]

The empty building was reportedly demolished after a fire and all that remains today are the inn's two gateposts.