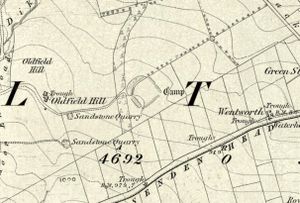 Situated on the eastern slopes of Oldfield Hill, approximately 1 mile west of Meltham, the site was initially thought to be that of a Roman encampment but is now known to have been an Iron Age enclosure initially surrounded by a wooden defensive palisade.

Another enclosure is situated to the south on Royd Edge.

In the adjoining township of Meltham, are the remains of a Roman encampment, on the moor below West Nab, a short distance to the left of the road which leads thence to the village, and in the property of Mr. Uriah Tinker, of Bent House, forming nearly a square of about four chains. When I visited the place about twenty years since, in company with the owner and other friends, the whole was very distinct and perfect. This piece of ground has since been brought into cultivation, yet the trenches are still visible. This encampment would appear only to have been made to supply some temporary emergency.

The flint weapon found on the breaking up of the moor above Wilshaw by James Redfearn, and now in the possession of the historian of "Kirkburton and the Graveship of Holme," adds another to the proofs already given of the residence of the Celts in this district. While the remains of a Roman encampment below West Nab, on the property of Uriah Tinker, Esq., in which querns or hand-mills for grinding corn were found, give indisputable evidence that the Romans were at one time living in close contiguity to the village.

Noted archaeologist Sir Ian A. Richmond carried out excavations at the site in 1923 and concluded it comprised the "remains of a small fort constructed in typically Roman fashion":[3][4]

Both ditch and rampart are typically Roman, and, while the type of fort suggests for it an early Flavian date, the excavations show that the occupation of the site was short. The fort lies on a spur of the hills where its only purpose can have been to guard the obvious route across the Pennines from Meltham to Saddleworth; and its position here, upon rather irregular ground, accounts for its shape, a successful adaptation of the standard rectangle to irregularity.

The place was just over an acre in size, and provided with one double gate of wood, placed where it was least accessible to a charging foe. Excavations, made by the writer in April, 1923, have proved that there were no ordinary buildings within the fort. Its irregular shape is an adaptation to the contour of the ground. On three sides a ditch six feet deep had been dug, mostly in middle grit sandstone. The rampart, consisting of the loose stones and earth cast up from the ditch, was twelve feet in average width and, accordingly to proportions given by Hyginus, should have been raised originally as high as nine feet. It is noteworthy that it was laid upon an artificial band of clay, levelled up over uneven ground. Embedded on the rampart [...] was a broken upper stone of a bee-hive quern, a British production, made from local mill-stone grit. From these details and from circumstantial evidence an attempt may be made to reconstruct the history of the site. It is clear that the fort was occupied only for a short time, and its size and shape suggest for an early date; yet it was held for longer than a night or two, since those who built it took the trouble to erect the rampart firmly upon laid clay and to construct a wooden gateway, through which they built for a few yards a rough cobbled road. They also cut in the rock a short drain from the roadway into the ditch. But it may be assumed with fair certainty that no general would want to build a semi-permanent fort along the pass after the cleverly engineered road through Castleshaw and Slack had been built. Thus the fort seems to represent an early attempt to cross the Pennines by an inconvenient route across six miles of high and cruelly bleak moorlands between Meltham and Greenfield.

However, a series of annual excavations carried out by the Huddersfield and District Archaeological Society between 1960 and 1967 found no evidence of a Roman occupation at the site and instead gave the following summary in their published report:[5]

SE 087101. A smaller palisaded enclosure was succeeded by a stone-revetted rampart and V-shaped ditch surrounding a sub-rectangular area of about one acre with an entrance on the east; on west and north the palisade lay beneath the rampart, and a counterscarp wall was seen on the west. A third phase of occupation was suggested by a later entrance cut through the western defences. Finds included stone discs, and a leaf-shaped arrowhead associated with graphite; rotary querns had been taken off the site previously; ferrous material was identified as slag, ironstone nodules and furnace lining. Nineteenth-century breaking up of the land and subsequent plough disturbance in a shallow soil meant that complete buildings could not be plotted, although several postholes occurred. The site was formerly regarded as a Roman fort, but there have been no Roman artifacts or features.

The monument includes a `D'-shaped late prehistoric enclosed settlement. It is situated on Oldfield Hill, 340m west of Wentworth Farm. The enclosure is approximately 80m by 85m in overall size. It has an earth and stone bank about 9m wide and 0.8m high, with an internal ditch on all but the south east side. On this side, the bank runs along the top of a steep scarp. The site was first excavated by I A Richmond in 1923 who found a double gateway and causeway on the north east side. Subsequent excavations in 1960-1 revealed two possible occupation phases. The surface of the track at the west corner of the enclosure and the fence bordering the track on the south west side of the enclosure are excluded from the scheduling, although the ground beneath these features is included.

Iron Age features | Listed buildings and monuments
This page was last modified on 19 November 2021, at 23:48.